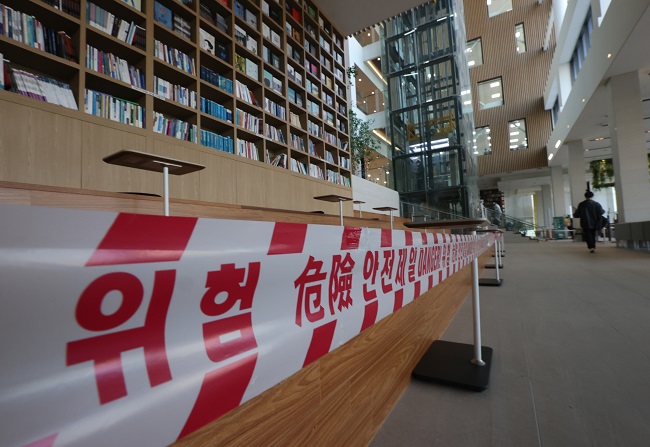 A student enters the library of Hankuk University of Foreign Studies in Seoul on Dec. 7, 2021, after the university restricted its operations after one of its foreign students was confirmed to be infected with the omicron COVID-19 variant. (Yonhap)

SEOUL, Dec. 7 (Korea Bizwire) — South Korea’s new coronavirus cases stayed below 5,000 for the second straight day Tuesday, but the number of critically ill patients hit a fresh high as concerns about a surge fueled by the omicron variant continued to put heath officials on edge.

The country added 4,954 new COVID-19 infections, raising the total caseload to 482,310, according to the Korea Disease Control and Prevention Agency (KDCA).

The number of critically ill COVID-19 patients hit a record high of 774, up 47 from a day ago, stoking fears that overworked medical staffers are further stretched thin and some patients might not get enough and timely medical attention.

As of 5 p.m. Monday, the bed occupancy rate of intensive care units was 83.6 percent in the greater Seoul area, and 78.2 percent in the rest of the country.

The death toll rose 64 to 3,957, the second-highest daily figure after 70 recorded on Saturday. The fatality rate stood at 0.82 percent.

Most of the dead were aged over 60, but one was under 10 years old — the second COVID-19 death among the age group. 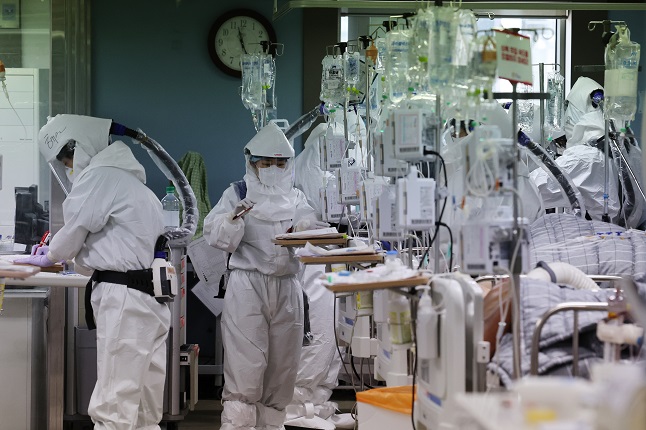 Medical worker wearing protective gear work at Bagae Hospital, a medical facility only for patients infected with the new coronavirus, in Pyeongtaek, south of Seoul, on Dec. 7, 2021. (Yonhap)

Of the total cases, Seoul reported 2,120 new cases, while 1,321 cases came from the surrounding Gyeonggi Province and 251 from Incheon, 40 kilometers west of Seoul.

As of 9 p.m. Tuesday, health authorities and local governments had reported a record high of 5,704 additional COVID-19 cases. Daily cases are counted until midnight and announced the following morning.

The number is up 2,146 from the same time the previous day, with the final number likely to surpass 6,000.

The government reimposed stricter virus-related restrictions on Monday to limit indoor gatherings and encourage more vaccinations in order to contain a surge in infections and the spread of the omicron variant. The measures will remain in effect until Jan. 2.

The KDCA has confirmed 36 omicron cases, up 12 from a day earlier.

The newly confirmed cases included three foreign students studying at universities in Seoul. They are said to have visited a church in Incheon where a couple, who were the first people to test positive for the omicron coronavirus variant in South Korea, attended.

On the vaccination front, 83.2 percent of the country’s 52 million population have at least received one shot of the vaccine, while 80.6 percent have received two shots.