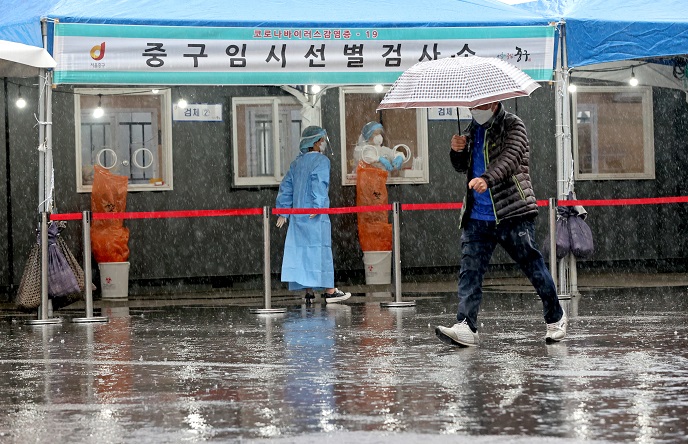 Medical workers wait for visitors to receive coronavirus tests at a makeshift clinic in front of Seoul Station on May 4, 2021. (Yonhap)

SEOUL, May 4 (Korea Bizwire) — South Korea’s daily new virus cases bounced back to the 500s on Tuesday amid growing fears that rising cases of COVID-19 variants could become another challenge to the country’s virus battle.

The daily caseload had been in the 600s since Wednesday, but it fell back to the 400s on Monday on fewer tests over the weekend.

Cases from more contagious variants have been spiraling upwards, accounting for some 15 percent of confirmed cases recently.

“The figures logged a double-digit rise for a second straight week,” Minister of the Interior and Safety Jeon Hae-cheol said in a virus response meeting.

Daily cases, compiled by health authorities and local governments, are counted until midnight and announced the following morning. The greater Seoul area accounted for around 64 percent of the total.

Health authorities said the country has identified 97 more cases of contagious variants, including 75 locally transmitted ones, bringing the total to 632.

A total of 87 cases were the Britain-originated variant, followed by 10 from South Africa.

A possible flare-up in new cases amid warm weather forced the health authorities to extend social distancing rules and a ban on private gatherings of five or more people for three more weeks until May 23.

The greater Seoul area, home to more than half of the country’s 52 million people, is under Level 2 social distancing, the third highest in the five-tier scheme, with non-capital regions under Level 1.5. 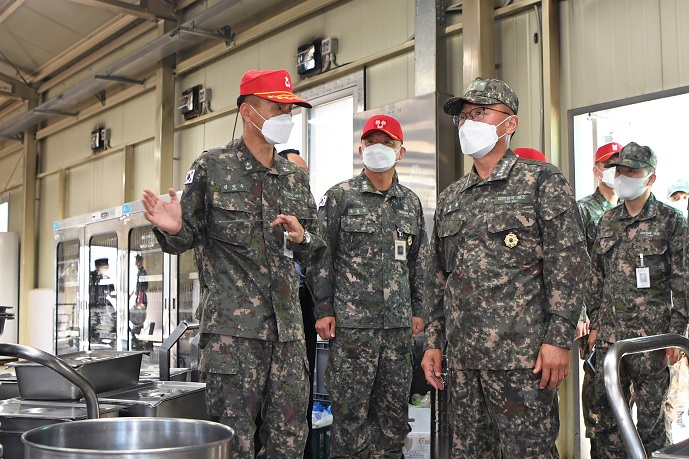 High-ranking officers of the South Korean Navy visit a restaurant for recruits to inspect the Navy’s measures against the new coronavirus on May 3, 2021, in this photo provided by the Navy.

A total of 3,466,908 people have received at least their first shots of COVID-19 vaccines, including 66,920 the previous day, since the country started its vaccination program on Feb. 26.

AstraZeneca’s vaccine has been given to 1.86 million people, while 1.60 million have received that of Pfizer.

A total of 17,485 cases of side effects after vaccinations have been reported, up 858 from a day earlier, but 98.1 percent were mild symptoms, including muscle pain and fever.

The KDCA said 85 deaths after vaccinations have been reported, up three from the previous day.

They said the exact causes of the deaths remain unknown as they could not determine causality.

On Monday, health authorities said they will rev up the nationwide inoculation drive by shipping in more vaccines by end-June.

The country aims to vaccinate 12 million people by the end of June in a bid to achieve herd immunity by November.

The country will receive 14.2 million doses of vaccines in May and June, enough to vaccinate up to 13 million people by end-June.

In a press briefing, health authorities said they aim to get back to normalcy by achieving herd immunity to overcome the new coronavirus, which has a lot of strains and continues to mutate.

As of April 26, 278 people were found to have been infected with the new coronavirus after receiving the first dose of a vaccine, according to the health authorities.

There were 27 new imported cases, up four from Monday.

The number of patients with serious symptoms across the country reached 162, down two compared with the previous day.

The total number of people released from quarantine after making full recoveries was 114,128, up 772 from a day earlier.