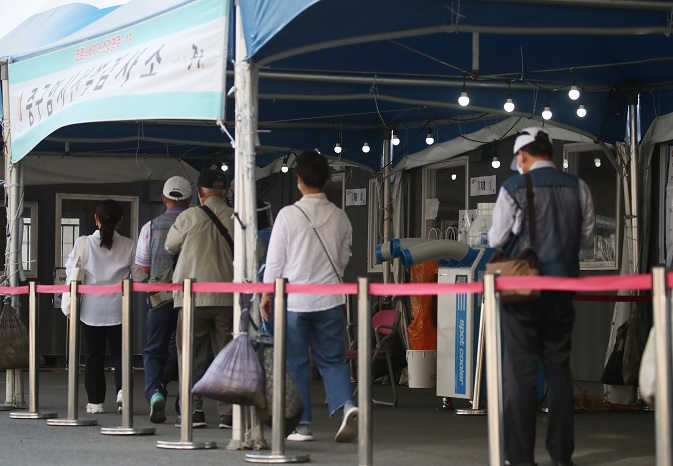 People stand in line to get COVID-19 tests at a screening station in front of Seoul Station on Sept. 4, 2021. (Yonhap)

SEOUL, Sept. 6 (Korea Bizwire) — South Korea’s daily new coronavirus cases fell back to the 1,300s on Monday due to fewer tests over the weekend, while health authorities extended the tough virus curbs ahead of a major national holiday.

The country added 1,375 more COVID-19 cases, including 1,351 local infections, raising the total caseload to 261,778, according to the Korea Disease Control and Prevention Agency (KDCA).

The daily caseload fell to a five-week low for any Monday, when new cases usually remain lower than other weekdays due to fewer tests over the weekend.

Daily cases have stayed in the four-digits for the last 62 days amid the fast rise of the more transmissible variants across the nation.

The country added six more deaths from COVID-19, raising the death toll to 2,321.

New infections popped up in various settings, including schools, workplaces, churches and hospitals, while 35.8 percent of them were untraceable cases, whose transmission routes were not identified, the KDCA said.

Between midnight and 9 p.m. on Monday, South Korea reported 1,436 cases, up 91 from the same period Sunday.

Daily cases are counted until midnight and announced the following morning. The number of infections tends to drop on weekends due to fewer tests and increase during the week.

Health authorities remained cautious about virus resurgence in the Seoul metropolitan area, which could spread across the nation when people travel during the fall harvest Chuseok holiday, set for Sept. 20-22.

Ahead of the major national holiday, authorities decided to extend the current distancing measures — Level 4 in the greater Seoul area, which is the highest in the four-tier system, and Level 3 in other regions — through Oct. 3.

“The new guidelines maintain the previous distancing scheme while cautiously easing some restrictions in tandem with the rising vaccination rate,” Kim Ki-nam, who leads the nationwide vaccination campaign, said in a briefing.

Despite the stringent curbs, some restrictions were eased to give leeway to vaccinated people and allow more students to take in-person classes to mitigate the prolonged pandemic’s impact on the local economy.

The country has been banning gatherings of more than four people nationwide, but the revised guidelines allow gatherings of up to six in the capital area, though they should include at least two vaccinated people during the daytime and four after 6 p.m.

Restaurants and bars in the greater Seoul area will be allowed to operate until 10 p.m., an hour later than the current restriction of 9 p.m. 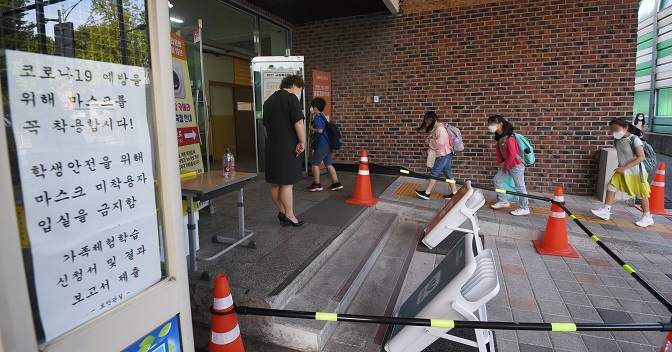 Students enter an elementary school in northern Seoul on Sept. 6, 2021, under a revised distancing measure that eased the attendance cap for in-person classes. (Yonhap)

The cap on in-person attendance was increased to two-thirds for middle school students and to half or the entire student body for high school students in areas under Level 4.

First and second grade elementary students, as well as senior high school students, will be allowed to attend in-person classes every day.

Health authorities said they will consider further easing restrictions if the infections dip to a manageable level after the Chuseok holiday to help bring life back to normal.

“The government is considering adjusting the quarantine measures in phases over a long period after delving into details and scope,” Sohn Young-rae, a senior health official, said.

“To get back to normal, new infections should first come down to manageable levels in September.”

In response to concerns over usage of expired vaccine shots in some hospitals, health officials said they will step up monitoring on vaccine stockpiles at local hospitals and improve the management system to make sure they are properly stored and administered within their expiration dates.

Among 46.4 million shots, 1,386, or 0.003 percent of the total, have been improperly administered, the KDCA said, noting no major side effects have been reported yet.

Of the newly confirmed domestic cases, 462 were from Seoul, 398 from the surrounding Gyeonggi Province and 80 from the western port city of Incheon.

Imported cases, which include South Korean nationals, came to 24.

The number of patients with serious symptoms across the country reached 358, down 5 from the previous day.

The total number of people released from quarantine after making full recoveries was 233,695, up 1,361 from a day earlier.