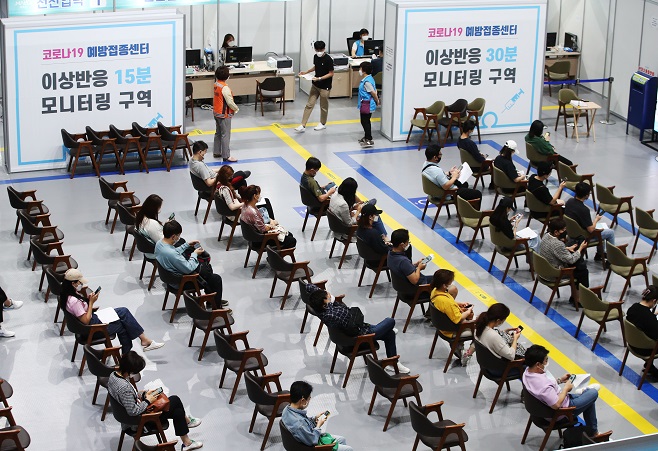 Citizens sit at a COVID-19 vaccination center in southwestern Seoul to be monitored for potential adverse reactions after receiving vaccinations on Sept. 27, 2021. (Yonhap)

SEOUL, Sept. 27 (Korea Bizwire) — South Korea’s daily coronavirus cases remained in the 2,000s for a second day Monday amid concerns the daily caseload may sharply increase as more people get tested after the extended holiday.

The country reported 2,383 new COVID-19 cases, including 2,356 local infections, bringing the total caseload to 303,553, according to the Korea Disease Control and Prevention Agency (KDCA).

The daily caseload touched a fresh high of 3,272 on Saturday before slightly falling to 2,771 on Sunday.

But health authorities predicted new cases may sharply rise from the middle of this week due to delta variants and the aftermath of a mass migration during the Chuseok holiday, the Korean autumn harvest celebration, which ran from Monday to Wednesday last week.

Daily cases have stayed over 1,000 for the last 83 days although the country implemented tough virus curbs to slow down the nationwide spread.

The country added six more deaths from COVID-19, raising the death toll to 2,456.

Later in the day, health authorities and local governments said 1,916 new cases were confirmed as of 9 p.m. on Monday, down 423 from the same time the previous day, apparently on fewer COVID-19 tests carried out over the weekend.

The tally already set a new record for Monday since the outbreak of the pandemic, hovering above the previous high of 1,729 posted last week.

The greater Seoul area, the hotbed of South Korea’s latest wave of the pandemic, has been under Level 4 distancing measures, the highest in the country’s four-tier system, since July, with most other areas being under Level 3.

Private gatherings are allowed with a maximum of six people on the condition that four of them are fully vaccinated.

The KDCA plans to announce new social guidelines Friday that will be applied next week.

The Seoul metropolitan area, home to half of the nation’s 52 million population, accounted for 71 percent of the total infections. 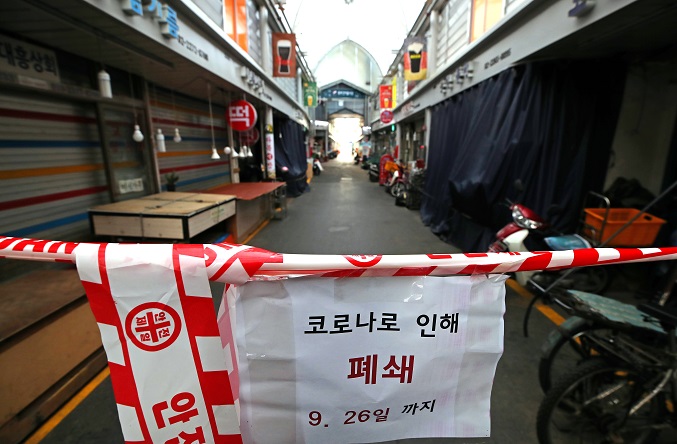 A traditional market in central Seoul is closed due to the outbreak of a cluster infection on Sept. 26, 2021. (Yonhap)

Under the new vaccination plan revealed Friday afternoon, the health authorities will vaccinate pregnant women and people aged between 12 and 17 starting on Oct. 18.

Additional vaccinations for people aged 60 and older, as well as medical workers who have been fully vaccinated, will start Oct. 25, which is slated for completion in the end of the fourth quarter of the year.

By Oct. 9, the authorities will wrap up the second vaccine jabs for people in their 50s.

As the vaccination rate rises, the government will push for its plan to get people back to normal life in phases starting at the end of next month, it said. The government aims to achieve herd immunity by the end of November.

Imported cases came to 27, including eight from the Philippines.

The number of patients with serious symptoms across the country reached 319, down one from the previous day.

The total number of people released from quarantine after making full recoveries was 269,132, up 992 from a day earlier.