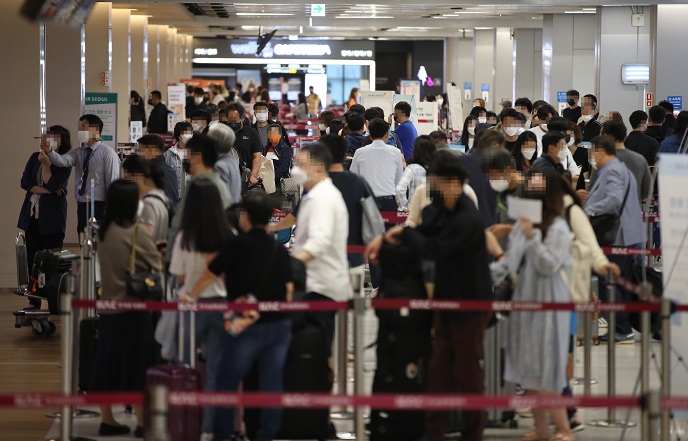 This photo taken on Oct. 8, 2021, shows people waiting at ticketing counters at Gimpo International Airport in western Seoul ahead of an extended weekend that includes Hangeul day. (Yonhap)

SEOUL, Oct. 8 (Korea Bizwire) — South Korea’s daily new coronavirus cases remained in the 2,000s for a third straight day Friday, following a long weekend, amid concerns over the spread of the pandemic ahead of another extended weekend.

The country added 2,176 more COVID-19 cases, including 2,145 local infections, raising the total caseload to 327,976, according to the Korea Disease Control and Prevention Agency (KDCA).

Daily infections rebounded to over 2,000 on Wednesday after falling below the 2,000 mark Monday and Tuesday due to fewer tests.

South Korea had reported more than 2,000 cases per day since Sept. 26, a day after daily cases exceeded 3,000 for the first time following the Chuseok holiday, the Korean equivalent of Thanksgiving.

Later in the day, health authorities and local governments said 1,742 new cases had been confirmed as of 9 p.m. Friday, down 196 from the same time the previous day. The daily tally is counted until midnight and announced the following day.

Health authorities remain on alert over further rises in new cases after another extended weekend ending Oct. 11 due to Hangeul Day, which celebrates the proclamation of the Korean alphabet.

For another two weeks starting Monday, South Korea extended the toughest social distancing rules in the greater Seoul area, home to half of the population of 51 million.

Since July 12, the greater Seoul area has been under the Level 4 measures, which include business restrictions and a ban on private gatherings of three or more people after 6 p.m.

With the country’s vaccinations gathering pace, the government is considering a gradual shift to a phase of “living with COVID-19″ around Nov. 9, under which COVID-19 is treated as an infectious respiratory disease, like seasonal influenza, with eased distancing being implemented. 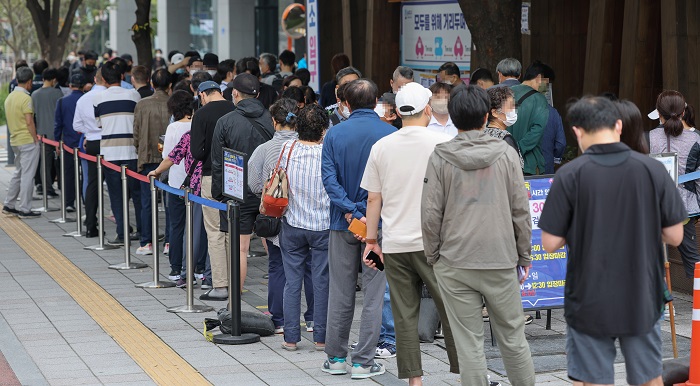 This photo taken on Oct. 8, 2021, shows people waiting to receive COVID-19 tests at a makeshift clinic in Seoul. (Yonhap)

The KDCA said 39.86 million people, or 77.6 percent of the population, have received their first shots of COVID-19 vaccines since February when South Korea began its inoculation campaign. The number of fully vaccinated people stood at 29.22 million, or 56.9 percent.

The government kicked off the next phase of its nationwide inoculation campaign Tuesday by opening vaccine reservations for teenagers born in 2004 and 2005.

Forty percent of 898,779 teenagers aged 16 and 17 made reservations for vaccines in the past three days. They are expected to receive Pfizer vaccines from Oct. 18.

The number of patients with serious symptoms across the country reached 377, up from 375 the previous day, the KDCA said.

The total number of people released from quarantine after making full recoveries was 292,091, up 3,269 from a day earlier.