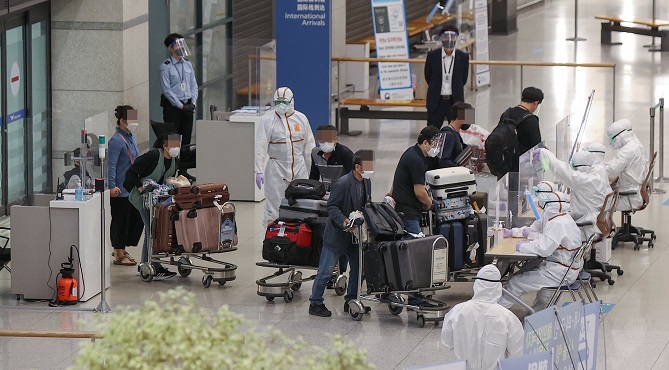 Quarantine officials attend to passengers who arrived from overseas at Incheon International Airport, west of Seoul, on May 4, 2021. South Korea has seen a steady increase in coronavirus infections in recent weeks, with the daily count reaching 676 on May 5. (Yonhap)

SEOUL, May 5 (Korea Bizwire) — South Korea’s daily new virus cases spiked to the 600s on Wednesday as rising cluster infections continue to hamper the country’s virus fight against the pandemic.

The daily new cases are sharply up from the 541 recorded a day earlier, the KDCA said. The number also bounced back to the 600s after three days.

The daily caseload has been on an upward trend over the past week.

The greater Seoul area, home to more than half of the country’s 52 million people, is under Level 2 social distancing, the third highest in the five-tier scheme, with non-capital regions under Level 1.5.

The wider Seoul area accounted for 63.3 percent of the new daily cases, with other parts of the world at 36.7 percent, the KDCA said.

Rising sporadic cluster infections across the country prompted authorities in the southeastern city of Ulsan to advise all employees at multiuse facilities in the region to take COVID-19 tests.

Preemptive COVID-19 tests are advised for all employees of the facilities, according to an administrative order issued by the municipal government.

There were 25 new imported cases, down two from a day earlier, the KDCA said.

The number of patients with serious symptoms across the country reached 173, up 11 compared with the previous day.

The total number of people released from quarantine after making full recoveries was 114,944, up 816 from a day earlier, the KDCA said. 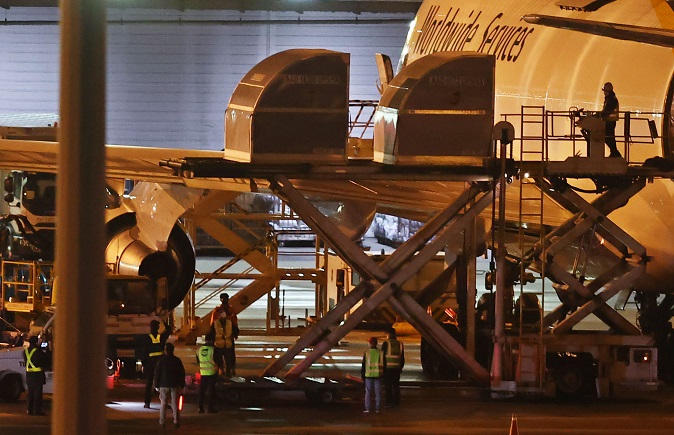 Another batch of Pfizer Inc.’s COVID-19 vaccine is unloaded from a cargo plane at Incheon International Airport, west of Seoul, on May 5, 2021. (Yonhap)

With an aim of achieving herd immunity by November, the authorities have been ramping up the vaccination campaign by importing more vaccines and increasing the daily inoculation cases.

A total of 3,530,014 people have received at least their first shots of COVID-19 vaccines, accounting for 6.9 percent of the country’s 51.3 million population, since the country started its vaccination program on Feb. 26.

A total of 18,110 cases of side effects after vaccinations have been reported, up 625 from a day earlier, the KDCA said.

Three new deaths possibly linked to the vaccination were reported, bringing the total caseload to 88, the KDCA said.

They said the exact causes of the deaths remain unknown as they could not determine causality.

As of 9 p.m. Wednesday, health authorities and local governments had reported 555 new COVID-19 cases, down 77 from the same time Tuesday.

On Monday, health authorities said they will rev up the nationwide inoculation drive by shipping in more vaccines by end-June.

The country will receive 14.2 million doses of vaccines in May and June, enough to vaccinate up to 13 million people by end-June.

Earlier in the day, another batch of Pfizer Inc.’s COVID-19 vaccines for around 218,000 members of the general public aged 75 and over, and other virus-vulnerable groups arrived in the country.

The products are part of a direct contract for 3.3 million people between the U.S. pharmaceutical firm and the Seoul government.

Starting Thursday, authorities will begin receiving reservations for vaccinations from seniors aged between 70 and 74, as well as others suffering from chronic respiratory diseases.