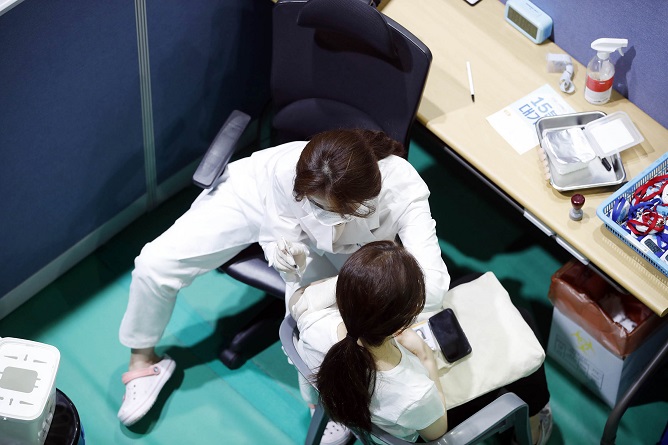 A medical worker vaccinates a citizen at a makeshift clinic in Gwangju, 330 kilometers south of Seoul, on July 16, 2021, in this photo released by the Buk Ward office of the city.

SEOUL, July 16 (Korea Bizwire) – South Korea’s daily new coronavirus cases fell slightly to the 1,500s on Friday, but new infections are highly likely to increase as summer vacation season nears amid a pileup of cases in the greater Seoul area and other regions.

The country added 1,536 new COVID-19 cases, including 1,476 local infections, raising the total caseload to 175,046, according to the Korea Disease Control and Prevention Agency (KDCA).

On Thursday, the country reported 1,600 cases, which was just below the daily record of 1,615 cases tallied Wednesday. Daily cases stayed above the 1,000 mark for the 10th consecutive day.

The country added one more COVID-19 death, raising the death toll to 2,051. The fatality rate came to 1.17 percent.

As of 9 p.m. Friday, health authorities and local governments reported 1,328 new cases for the day, down 85 from the same time in the previous day. Daily cases are counted until midnight and announced the following morning.

The greater Seoul area, home to half of the country’s 51.3 million population, has been under the highest level of social distancing measures since Monday, while most other regions have toughened restrictions from Thursday.

The wider Seoul area has been the hotbed for the recent resurgence in new outbreaks, but the non-capital area has seen upticks in the daily caseload over the past week.

The proportion of newly confirmed cases outside the Seoul area surged to 29.4 percent Thursday from 22.1 percent a week ago.

Under the toughest virus curbs, gatherings of more than two people are banned after 6 p.m., and entertainment establishments, including nightclubs and bars, are ordered to shut down, while restaurants are allowed to have dine-in customers until 10 p.m.

Citing the data provided by leading mobile operator SK Telecom Co., authorities said the number of people moving to other districts in the capital area fell by 11 percent on-week, after the launch of the Level 4 social distancing scheme.

The country decided to apply Level 2 for most regions outside the capital, in which gatherings of more than eight people are banned.

Prime Minister Kim Boo-kyum, however, urged regional governments to adopt further toughened restrictions with the cap at just four amid growing concerns over the nationwide spread of the virus.

Kim said the country may consider banning gatherings of more than two people in areas outside Seoul after 6 p.m. as well if the curve of daily virus cases does not flatten soon.

The remark came as some citizens traveled from the capital region to surrounding areas at late hours to avoid the semi-curfew. 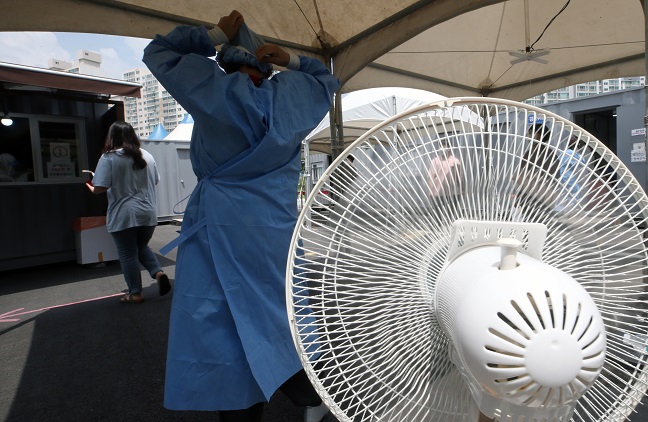 A medical worker stands next to a fan at a clinic in Gangneung, 237 kilometers east of Seoul, on July 16, 2021, amid the scorching summer heat. (Yonhap)

Authorities expect daily cases to peak in the 2,000s by mid-August before falling to the 600s on the back of the tightened distancing rules coupled with the inoculation program.

A total of 15.9 million people, or 31.1 percent of the country’s population, have received their first shots of COVID-19 vaccines as of Friday.

The KDCA added 6.32 million people have been fully vaccinated, accounting for 12.3 percent of the population.

Amid a tight supply of jabs, health authorities said it plans to bring in at least 35 million additional doses of jabs by the end of August.

Health authorities plan to vaccinate high school seniors and staffs starting next week, ahead of the nationwide college entrance exam slated for later this year.

Of the newly confirmed domestic cases, 564 were from Seoul, 448 from the surrounding Gyeonggi Province and 95 from the western port city of Incheon.

Cases continued to pile up in other regions as well.

Over the past two weeks, around 32 percent of the newly confirmed cases had unknown transmission routes, sparking concerns over asymptomatic silent spreaders.

Imported cases, which also include South Korean nationals from overseas, came to 60.

Arrivals from Indonesia accounted for 26, followed by the Philippines and Myanmar with four cases each.

As part of efforts to prevent the inflow of COVID-19 variant cases, South Korea added the United Arab Emirates to the list of countries whose arrivals will not be allowed to skip a mandatory 14-day quarantine even if they are fully vaccinated, raising the number of such countries to 22.

The total number of people released from quarantine after making full recoveries was 157,113, up 604 from a day earlier. This indicates around 90 percent of the patients reported have been fully cured.

The number of patients in critical condition came to 171, up four from the previous day.

Health authorities warned that the delta variant of COVID-19 may emerge to become a dominant strain here, which may lead to an uptick in the number of critically ill patients and deaths.

South Korea also has been making efforts to develop treatments for the delta variant, with the country recently making significant progress through animal experiments, according to health authorities.

It may take more time, however, for the treatment to be actually applied to people, they added.