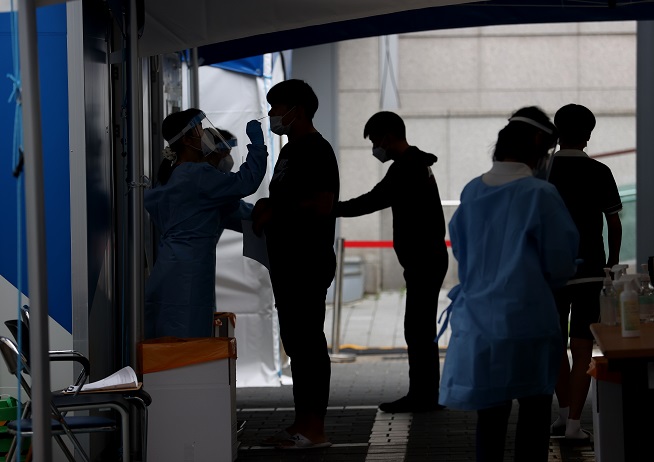 A medical worker collects a swab sample for a coronavirus test at a screening center in northern Seoul on Sept. 2, 2021. (Yonhap)

SEOUL, Sept. 2 (Korea Bizwire) – South Korea’s daily new coronavirus cases fell back below 2,000 on Thursday, as the country is planning to unveil revised distancing guidelines later this week that may potentially include allowing family gatherings during the Chuseok holiday.

The country added 1,961 more COVID-19 cases, including 1,927 local infections, raising the total caseload to 255,401, according to the Korea Disease Control and Prevention Agency (KDCA).

The number marked a slight drop from the 2,025 tallied Wednesday. Daily cases have stayed above 1,000 for 58 consecutive days.

The number of patients normally falls over the weekend and rises later in the week as more people get tested, often breaching the 2,000 mark.

The number of patients with serious symptoms across the country reached 371, down 28 from the previous day.

As of 9 p.m. Thursday, health authorities and local governments reported 1,652 more cases, down 94 from the same time on Wednesday.

Daily new cases are counted until midnight and announced the following morning.

Health authorities believe the current virus curbs, which center on banning gatherings of more than two after 6 p.m. in the greater Seoul area, along with major cities, are working to help contain a further uptick in the number of daily cases to some extent.

The end of the summer vacation season also helped the country contain the virus outside the capital area.

But health authorities remain wary of more contagious strains of COVID-19, including the delta variant, which could spread across the country during the upcoming Chuseok holiday, the Korean equivalent of Thanksgiving, when millions travel to visit their relatives.

The country plans to release details of the social distancing guidelines Friday. They will be applied from Monday through Chuseok, which runs from Sept. 18-22.

While the health authorities plan to maintain most virus restrictions, business hours of restaurants and bars may be extended to 10 p.m. from the current restriction of 9 p.m., and gatherings of relatives with more participants may be allowed, up from the current ceiling of four. 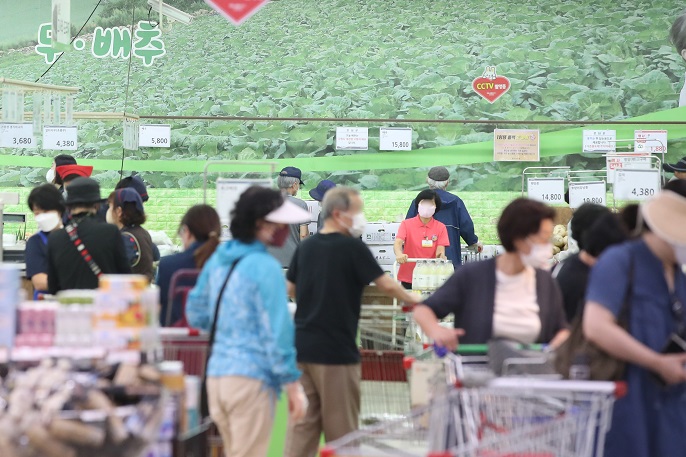 People wearing masks shop for groceries at a store in Seoul on Sept. 2, 2021. (Yonhap)

South Korea’s inoculation program, however, recently has been challenged by a delayed supply from a vaccine provider, namely U.S.-based Moderna Inc.

Health authorities said some 1.02 million doses of Moderna’s vaccine will arrive here later in the day, part of the 6 million doses scheduled to land here by Sunday.

Of the newly confirmed domestic cases, 555 were from Seoul, 688 from the surrounding Gyeonggi Province and 120 from the western port city of Incheon, the authorities said.

Imported cases, which include South Korean nationals, came to 34.

Arrivals from the United States accounted for seven, followed by Uzbekistan with six. Those from Russia took up four.

The total number of people released from quarantine after making full recoveries was 226,222, up 1,903 from the previous day. Around 88.5 percent of the patients reported here have been fully cured.