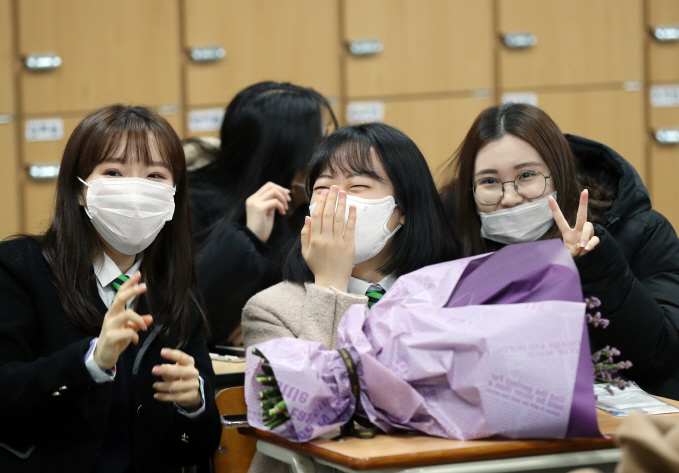 Students at a high school in the southwestern city of Gwangju attend a graduation ceremony in their classroom instead of the school auditorium on Jan. 29, 2020. (Yonhap)

SEOUL, Jan. 31 (Korea Bizwire) — Eleven days after South Korea confirmed its first case of a new type of coronavirus, concerns over the contagious disease have permeated everyday life, affecting people in different corners of the country.

“I didn’t think much of the (outbreak) last week, but it started to weigh on me this week,” said the Seoul-based illustrator.

South Korea has confirmed 11 cases so far, with nine of the cases — including the first case of secondary infection here — announced this week.

“It’s not that I stopped going out with my daughter, but even if I go out I always put a mask on her and get a taxi instead of using the subway,” she said.

Other parents of young children also voiced concern over the virus that first emerged in the central Chinese city of Wuhan.

“I try to avoid crowded places and always make my son wear a mask and wash his hands,” said a 34-year-old mother from Pangyo, south of Seoul.

“I can’t help but send him to the nursery,” said the mom, who works at a Seoul-based company and prefers to have her son stay at home.

Children wearing masks have become an everyday scene and coughing and sneezing in public transportation has started to invite suspicious stares from other passengers.

As demand has surged, a majority of masks for sale online have sold out. Some offline businesses, such as E-mart, are limiting the number of purchases for each customer to meet demand.

As getting a mask is becoming more difficult, some consumers have complained that sellers are canceling orders and raising prices to eke out higher margins during the mask craze.

In addition to the precautionary measure of asking students and teachers who have visited China to isolate themselves, some schools have extended their winter vacation to minimize exposure to potential coronavirus victims. 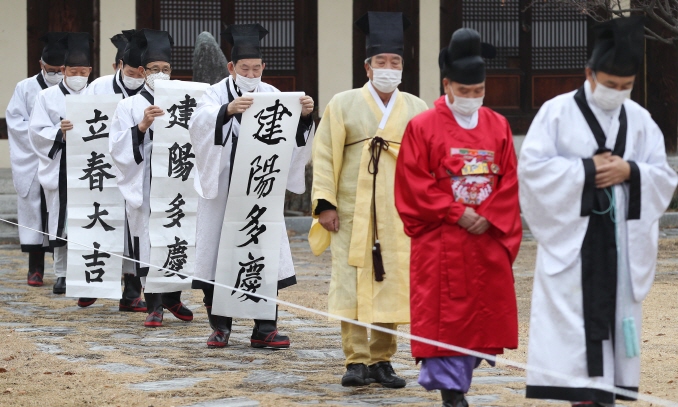 Participants wearing masks take part in a Confucian ceremony in the central city of Daegu on Jan. 31, 2020. (Yonhap)

As of Friday, seven elementary schools in Seoul have extended their winter breaks.

Two elementary schools in South Chungcheong Province near facilities that will host South Koreans evacuated from Wuhan have also rescheduled their vacations.

The outbreak is also changing how Koreans celebrate two key academic milestones, the first day of school and graduation ceremonies.

A handful of middle schools and high schools across the country have scaled back their graduation ceremonies, by broadcasting the ceremony to students in their classrooms and preventing parents from attending the event.

Universities are not an exception, with graduations and entrance ceremonies scheduled throughout February posing potential risks.

Sungkyunkwan University, based in Seoul and Suwon, has called off an entrance ceremony as well as several welcome events for freshmen.

“I understand the school’s decision but still it’s a bit discouraging. I was looking forward to meeting other students and learning about the school, but we won’t have that chance this year,” said a 20-year-old surnamed Lee, who is set to start his engineering degree at the school.

Rising concerns, meanwhile, have fueled the spread of fake news and scam messages in relation to the disease.

The government has vowed to take stern measures, with the police tightening online monitoring and launching probes into distributors of fake news.

On Thursday, President Moon Jae-in called for the people to “actively stand up against excessive anxiety and vague fear,” calling the production of fake news a “grave criminal act.”