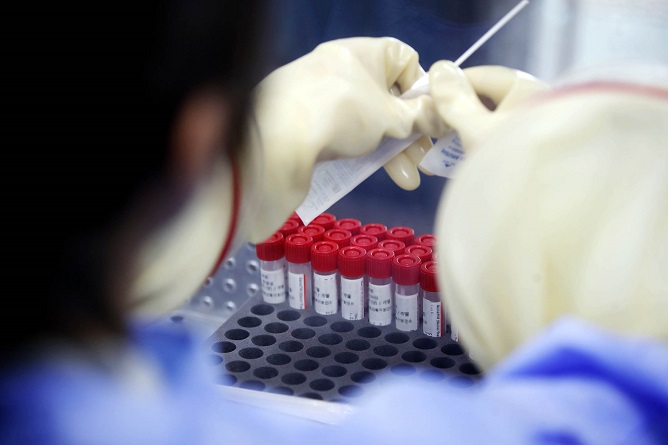 A medical worker checks COVID-19 test samples at a makeshift testing station in the southwestern city of Gwangju on Aug. 17, 2022, in this photo provided by a ward office of the city.

SEOUL, Aug. 18 (Korea Bizwire) — South Korea’s new COVID-19 cases stayed above 170,000 for the second consecutive day Thursday as the country is experiencing a new virus wave amid the continued spread of a highly contagious omicron subvariant.

The country added 178,574 new COVID-19 infections, including 633 cases from overseas, bringing the total caseload to 21,861,296, according to the Korea Disease Control and Prevention Agency (KDCA).

It marked a slight fall from the previous day when the figure hit a four-month high of 180,803. But Thursday’s figure is also 1.3 times larger than a week earlier.

The increase seems to be attributable to the growth in the number of people traveling overseas during the summer vacation season.

The number of critically ill patients came to 470 on Thursday, according to the KDCA.

The country also reported 61 more COVID-19 deaths in the day, bringing the total to 25,813, the KDCA said. The fatality rate stood at 0.12 percent. 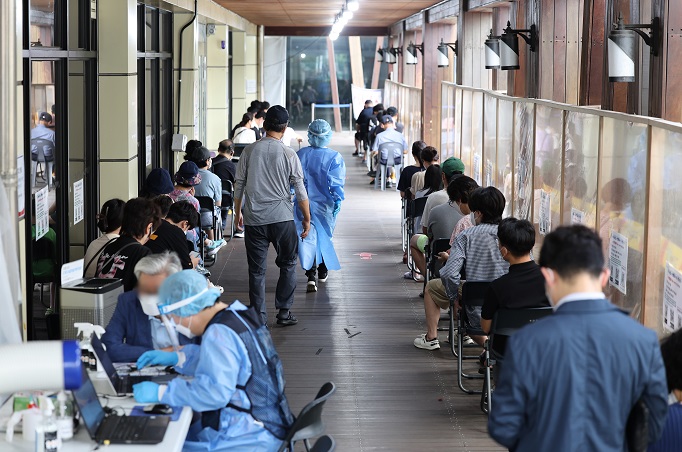 People wait to undergo a COVID-19 virus test at a makeshift testing station in Seoul on Aug. 17, 2022. (Yonhap)

Of the total deaths reported Thursday, those aged 60 and older accounted for 92.1 percent.

But the health authorities said that they are monitoring the recent surge in deaths among young COVID-19 patients.

Since January 2020 when the country confirmed its first virus case, a total of 29 citizens aged younger than 10 have died. Of them, 20.7 percent were reported since last month, the KDCA said.

Among those aged 18 and younger, a total of 44 COVID-19 patients have died so far.

Of the victims, 52.3 percent had underlying health conditions, including neurological disorders and endocrine system issues, according to the KDCA.

To better treat young patients, the government reserved 2,727 hospital beds for young virus patients, up from 246 as of end-June. It has also been encouraging parents to have their young children inoculated.

“The inoculation campaign for young citizens seeks to prevent serious cases and deaths. Vaccination is highly recommended for those with underlying diseases,” a KDCA official said.

Children aged 5-11 are supposed to receive two-dose vaccinations, and 1.5 percent in this age group have been fully vaccinated.

Those aged 12 to 17 are eligible for a booster shot, and 16.5 percent have been inoculated so far, the KDCA said.

South Korea has seen another virus wave since July driven by the omicron subvariant BA.5 and the government’s lifting of virus curbs.

BA.5 accounted for 87.9 percent of total infections last week. It became the dominant variant in South Korea at the end of last month.

The KDCA has said that new infections are expected to peak at around 200,000 this month before shrinking at a slower pace, though the situation could change in line with potential impacts of the summer vacation season, weather conditions and other factors.

As of the first week of August, South Korea reported around 14,000 infections for every 1 million people, which is far higher than that of other major nations. The figure for the United States came to 2,000 and that for Japan stood at 11,000.

But the death toll in South Korea is far below that of the U.S., Japan and Singapore, the KDCA said, vowing continued efforts to prevent serious cases and deaths.