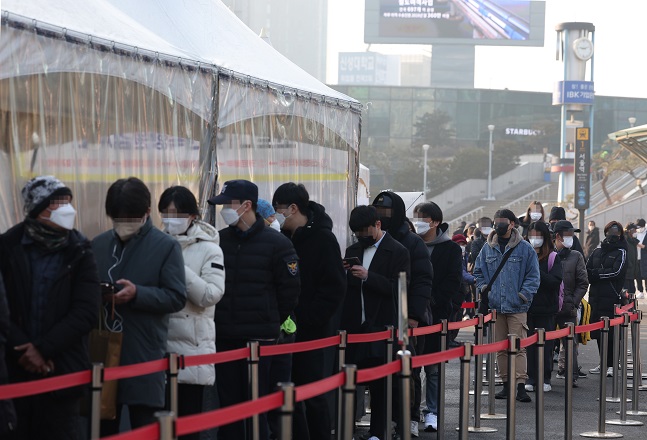 People wait in line to take COVID-19 tests at a makeshift testing center in front of Seoul Station in central Seoul on Feb. 12, 2022. South Korea recorded a daily high of 54,941 new COVID-19 infections, raising the total to 1,294,205, according to the Korea Disease Control and Prevention Agency. (Yonhap)

It marks the third day in a row that the daily tally exceeded the 50,000 level. A total of 53,926 cases were reported Friday.

As of 9 p.m., the country had added 52,957 new COVID-19 cases, up 669 from the same time the previous day, according to health authorities and city governments. It is the highest-ever figure compiled by 9 p.m.

The health authorities have warned that the figure could reach 170,000 by around the end of this month, though it is too early to say if it will be the peak of the omicron surge.

The National Institute of Mathematical Sciences, South Korea’s state-run think tank, estimated daily new cases could even reach as high as 360,000 by early next month.

The number of critically ill COVID-19 patients was 275, up four from a day earlier, the KDCA said. The daily tally has stayed in the 200s for 15 days in a row.

At-home patients surged to 199,261, up 22,247 from a day earlier, due to the fast growth in the number of people with mild or no symptoms due to the omicron variant. 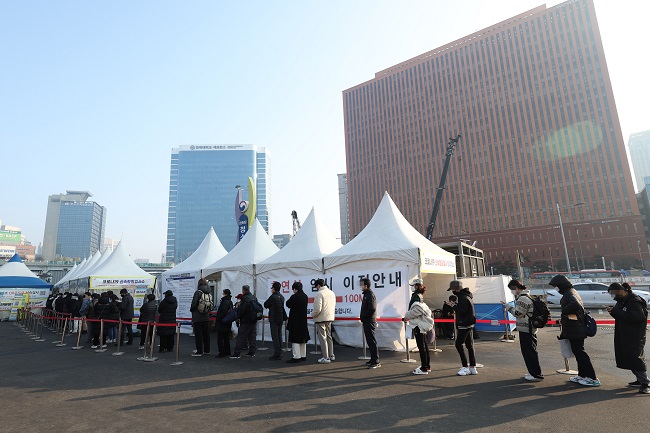 People wait in line to take COVID-19 tests at a makeshift testing center in front of Seoul Station in central Seoul on Feb. 12, 2022. South Korea recorded a daily high of 54,941 new COVID-19 infections, raising the total to 1,294,205, according to the Korea Disease Control and Prevention Agency (KDCA). (Yonhap)

Since Thursday, health authorities have been making daily checkup calls only to high-risk patients in a move to alleviate the workload of health workers and government officials, and to better deal with the current pandemic trends.

The high-risk group includes COVID-19 patients in their 60s and older, citizens in their 50s and with underlying health issues, and others with compromised immune systems.

Low-risk patients, those aged 49 or younger, are left to monitor their conditions by themselves and contact local hospitals if they worsen.

Of the locally transmitted cases, Gyeonggi Province that surrounds Seoul reported 15,960, followed by Seoul with 13,198 and the western port city of Incheon with 5,059, the KDCA said.

Daily new cases from overseas fell by 16 from a day earlier to 113, it said.

According to the government, approximately 10 percent of current virus patients are being treated at medical facilities, while around 90 percent of the remaining patients are treating themselves at home.

Among the at-home patients, 15 percent are subject to twice-a-day checkups by local health officials.

In light of the surge in at-home treatment patients, the government announced it will temporarily restrict the buying of COVID-19 self-test kits to five units per purchase for three weeks in order to stabilize the supply of the kits.

According to the Ministry of Food and Drug Safety, the purchase restriction of self-test kits will be enforced for three weeks starting Sunday. Customers, however, will be allowed to purchase additional kits at different stores if needed, according to officials.

Self-test kits will also only be available through in-person purchases at local pharmacies, and CU and GS25 convenience stores during the three-week period.

As of Saturday, 28.94 million people, or 57 percent of the country’s 52 million population, had received booster shots. The number of fully vaccinated people came to 44.2 million people, accounting for 86.1 percent.