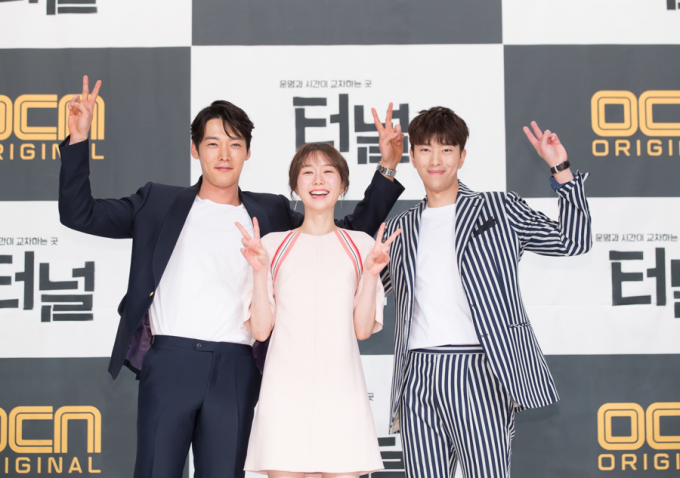 The main cast of “Tunnel” pose for the camera at a media event held at Time Square mall in western Seoul on March 22, 2017. (image: CJ E&M)

SEOUL, Mar. 23 (Korea Bizwire) — In recent years, cable television channel OCN has made a name for itself by producing smart and well-polished original crime procedurals, including last year’s “Squad 38″ and this year’s critically acclaimed series “Voice.”

Continuing this tradition, the network is set to premiere a new crime show titled “Tunnel,” which incorporates time travel — a familiar TV trope today — in solving a serial murder case that spans over three decades.’

“The story deals with a serial murder case, but we tried to infuse a sense of humanism in the story as opposed to the grotesque side of a crime show,” Director Shin Yong-hwi said at a media event held at Time Square mall in western Seoul on Wednesday.

He travels 30 years into the future to the modern day via a mysterious tunnel and teams up with Detective Kim Sun-jae and psychologist Shin Jae-ee, played by Yoon Hyun-min and Lee Yoo-young, respectively.

Director Shin said he wanted to create a team that complimented each other. Park is a tough-but-warm detective who empathizes with the victims of his cases, while Kim is a loner that is the polar opposite. Shin is an adoptee who had a lonely childhood.

“I think our show is more of a human drama in which people, each with their personal deficiencies, complement each other throughout the show,” he said.

Choi Jin-hyuk said he was reminded a lot of “Memories of Murder” while reading the script for the first two episodes.

“A lot of detectives in the past, to my knowledge, were rough. They cursed a lot as well. I tried to portray a vehement yet passionate image of past detectives,” the star said.

On comparisons with “Signal,” last year’s tvN detective series that also incorporates time-slip elements, Choi said he didn’t have the chance to properly watch that show.

The two male leads are expected to show off a strong “bromance” on screen.

“(In the show) I have a melo (romantic interaction) with Lee Yoo-young, but I’m worried that it may be overshadowed by the bromance with Jin-hyuk,” said Yoon jokingly.

“Tunnel” also marks the television debut for actress Lee, a newcomer to show business who has appeared in several low-budget movies since 2016.

“I was a nervous a lot since it was my first TV drama,” the actress said, adding that she worked hard to correct her rigid acting in the early parts of filming.

“Tunnel” is set to premiere on Saturday.’