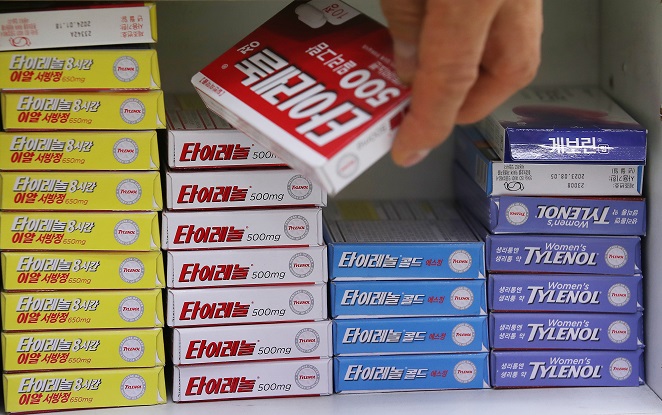 Boxes of pain and fever relief medication are displayed at a pharmacy in Seoul on May 30, 2021. Health authorities advise people who get fever after vaccinations to take pain and fever reducers, such as Tylenol. (Yonhap)

SEOUL, May 30 (Korea Bizwire) — South Korea’s daily new coronavirus cases fell back to the 400s on Sunday for the first time in 20 days amid continued cluster infections and growing fears over the spread of more virulent variants.

It marks the first time that the new caseload fell below 500 since May 10 when 463 cases were reported. The drop is believed to be partly due to fewer tests conducted over the weekend.

There were six additional fatalities, raising the death toll to 1,957. The fatality rate was 1.4 percent.

Later in the day, health authorities and local governments reported 395 new cases as of 9 p.m., down 54 from the same time the previous day.

Daily caseloads stayed between the 500s and the 700s last week. After soaring in December, they have not let up due to continued community infections.

In a bid to contain the spread of the virus, the government plans to maintain bans on private gatherings of five or more people for the time being.

But it will loosen the current social distancing measures in July if the average daily caseload remains below 1,000 and at least 13 million people, accounting for 25 percent of the country’s total population, have been inoculated by the end of June.

The country also plans to vaccinate 36 million by September in order to achieve herd immunity in November.

A total of 5.4 million people, including 163,457 the previous day, have received their first shots of COVID-19 vaccines, taking up 10.5 percent of the total population, since the country started its vaccination program on Feb. 26.

AstraZeneca’s vaccine has been given to 3.27 million people, while 2.13 million have received that of Pfizer.

The KDCA said 2.14 million people have been fully vaccinated, with an additional 8,532 receiving their second jabs the previous day, accounting for 4.2 percent of the total population.

People who have gotten their first shots will be allowed to take their masks off outdoors starting in July.

The country also started to allow younger people who are not yet officially eligible to receive shots to apply for leftover vaccines through popular mobile platforms Thursday.

Citizens line up to take COVID-19 tests on May 29, 2021, at a screening center set up in a public health center in Songpa Ward, Seoul. (Yonhap)

The number of people who got vaccinations by using mobile platforms Naver and Kakao reached 1,560, with the cumulative figure since May 27 coming to 9,046.

In a meeting held later on Sunday, Prime Minister Kim Boo-kyum said the U.S. government has provided Johnson & Johnson’s Janssen COVID-19 vaccine for 1 million people in South Korea and that the doses will arrive this week.

The amount is nearly two times the volume that U.S. President Joe Biden vowed to provide, during his summit with South Korean President Moon Jae-in earlier this month, to fully inoculate all 550,000 South Korean service members.

Health authorities said the Janssen vaccine from the U.S. will be administered to reservists, civil defense members and diplomacy and defense-related officials who are aged 30 and over, on a preferential basis, in mid-June.

In April, South Korea authorized the use of Janssen’s single-shot regimen as the country’s third approved vaccine, though this type of vaccine is yet to be administered.

Of all South Korean troops, more than 116,700 in their 30s and older have already received AZ vaccines, while younger soldiers are supposed to receive Pfizer’s vaccines.

Of the 464 new local infections, 333 cases came from the capital area, with 159 from Seoul, 156 from Gyeonggi Province and 18 from Incheon, 40 kilometers west of the capital.

There were 16 additional imported cases, down 12 from a day earlier. The country’s total number of imported cases is now at 9,034.

Health authorities are especially keeping close tabs on COVID-19 variants from overseas that are believed to be more contagious.

The number of seriously or critically ill COVID-19 patients came to 150, down 10 from the previous day.

The total number of people released from quarantine after making full recoveries was 130,381, up 642 from a day earlier, with 7,572 people being isolated for COVID-19 treatment, down 169 from a day ago.