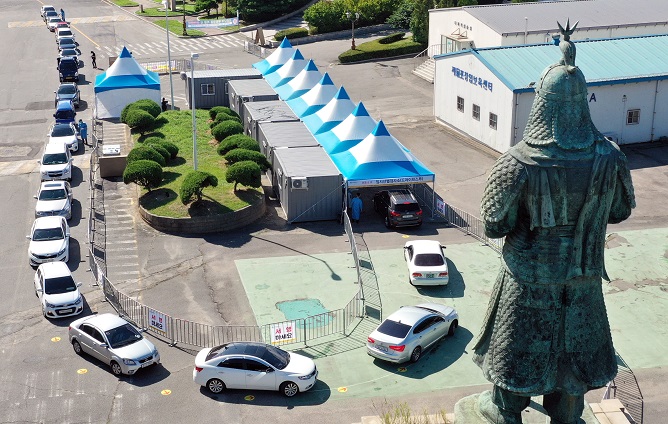 Cars are bumper to bumper at a drive-thru coronavirus screening center in Incheon, about 40 kilometers west of Seoul, on Aug. 9, 2021. (Yonhap)

SEOUL, Aug. 9 (Korea Bizwire) — South Korea’s daily new coronavirus cases fell back to below 1,500 on Monday on fewer tests over the weekend as the country has extended its highest virus rules for another two weeks due to the relentless spread of the virus.

The country added 1,492 COVID-19 cases, including 1,455 local infections, raising the total caseload to 212,448, according to the Korea Disease Control and Prevention Agency (KDCA).

The latest caseload was down 237 from 1,729 the previous day, falling below the 1,700s for the first time since Wednesday.

The country added four more deaths from COVID-19, raising the death toll to 2,125.

Health authorities decided to extend the Level 4 distancing measures, the highest in the country’s four-tier system, for the greater Seoul area until Aug. 22, with other areas remaining under Level 3.

The Level 4 restrictions ban gatherings of more than two people after 6 p.m., place a 10 p.m. curfew on restaurants and cafes, and suspend the operations of nightclubs and other entertainment venues.

The country’s second largest city of Busan will raise its distancing rules to the toughest level from Tuesday until Aug. 22 as new infections have soared in the city in recent weeks.

The move came amid concerns over the fast spread of the virus during the Liberation Day holiday from Saturday to next Monday and the start of half school semesters later this month.

The country’s fourth wave of the COVID-19 pandemic began to ravage the greater Seoul area in early July and has expanded to other areas, with daily cases staying above 1,000 for 34 days. 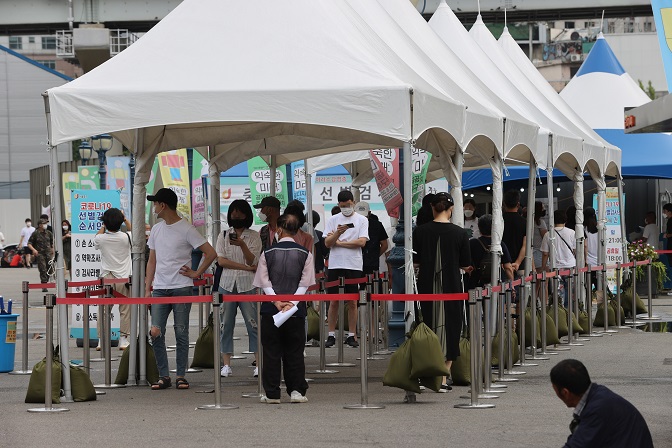 People wait in line to receive COVID-19 tests at a makeshift testing center in front of Seoul Station in central Seoul on Aug. 8, 2021. (Yonhap)

Since the country kicked off its vaccination program in late February, a total of 20.93 million people, or 40.8 percent of the country’s 51.3 million population, have received their first shots of COVID-19 vaccines.

Around 15 percent, or 7.71 million people, have been fully vaccinated, according to KDCA data.

Advance reservations for vaccinations for people aged 18 to 49, estimated at some 16 million, start at 8 p.m. Monday.

The health authorities said the country may run short of its vaccine supply this month.

Moderna has notified the government that its supply of 8.5 million doses of vaccine for August will be cut to less than half of them.

The country has secured five kinds of COVID-19 vaccines, which amounted to 193 million doses able to be given to 100 million people COVID-19.

Of the locally transmitted cases, 414 were reported in Seoul, with the surrounding Gyeonggi Province adding 402, and the western port city of Incheon confirming 65 more new cases.

There were 37 cases from overseas arrivals, which include South Korean nationals.

The total number of people released from quarantine after making full recoveries was 186,242, up 1,239 from a day earlier.

As of 9 p.m. Monday, South Korea reported 1,384 new cases, down 31 from the same time on Sunday. Daily cases, compiled by health authorities and local governments, are counted until midnight and announced the following morning.