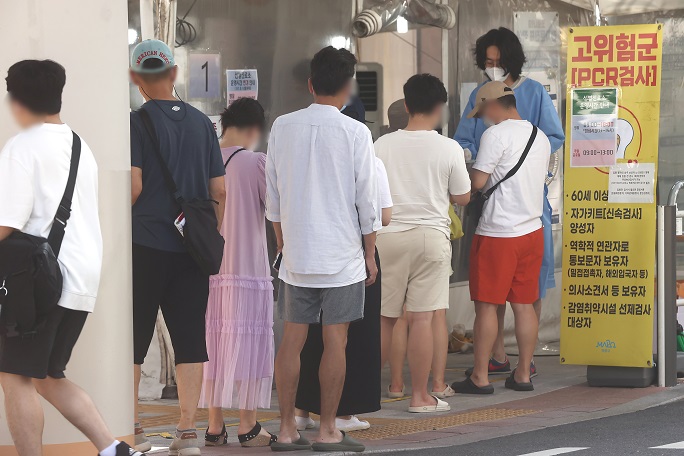 People crowd a COVID-19 test clinic in Seoul on July 28, 2022, as the contagious virus surges again during the summer vacation period. (Yonhap)

SEOUL, July 30 (Korea Bizwire) — South Korea’s new COVID-19 cases stayed below 90,000 for the third straight day Saturday but were steeply up from a week ago, amid a spike in omicron subvariant infections.

The country added 82,002 new COVID-19 infections, including 397 from overseas, bringing the total caseload to 19,702,461, the Korea Disease Control and Prevention Agency (KDCA) said.

Saturday’s tally is slightly down from the previous day’s 85,320, but it marks a 19.6 percent increase from a week earlier.

Daily infection cases have bounced back as the country is grappling with another wave of the COVID-19 pandemic, triggered by the highly contagious omicron subvariant BA.5.

The pace of transmissions is quickening during the summer, largely due to increased mobility and outdoor activities amid eased virus curbs.

The number of critically ill patients came to 242, up eight from the previous day.

As of 9 p.m., the country had reported 70,191 additional cases, down 8,552 from the same time the previous day. But the tally was 1.11 times higher than the number from a week ago. Daily cases are counted until midnight and announced the following morning. 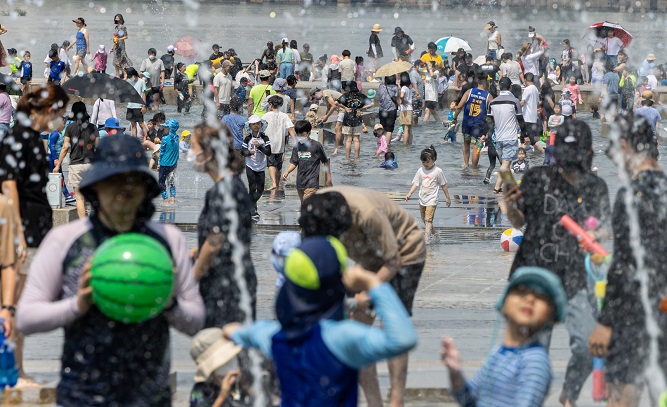 A riverside park in Yeouido, Seoul, bustles with vacationers amid a scorching heat wave on July 3, 2022. (Yonhap)

According to the report by the state-funded National Institute for Mathematical Sciences released Wednesday, the country’s new daily virus cases may gradually increase until mid-August.

The KDCA is paying keen attention to the infections of the omicron subvariant BA.2.75, known as the “Centaurus variant.”

South Korea additionally confirmed three new cases of the BA.2.75, all transmitted from overseas, raising the total caseload to seven.

The subvariant is more able to escape immunity compared with earlier versions. It is known to be even more contagious than the BA.2, or the “stealth omicron variant,” and the dominant BA.5.

Despite the virus resurgence, health authorities said they are not considering tightening antivirus restrictions, such as social distancing and business hour curfews, and that the post-pandemic efforts toward regaining normalcy will continue.

Of the 81,605 locally transmitted cases reported Saturday, Seoul and the surrounding Gyeonggi metropolitan area accounted for 42,990, or 52.7 percent.