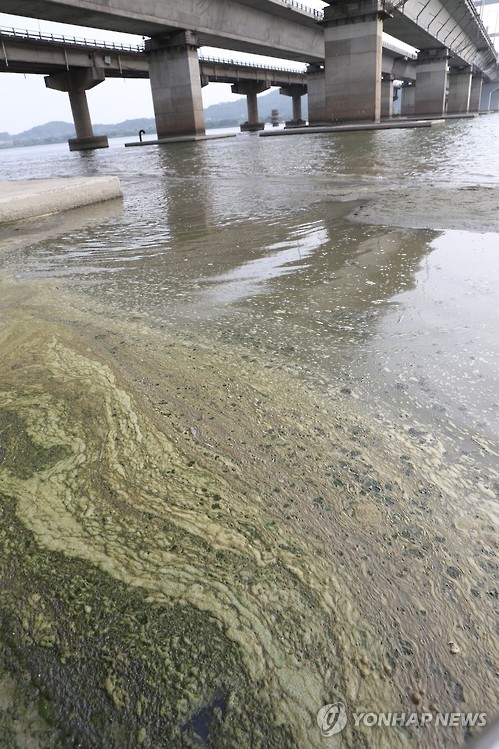 But despite the apparent drawbacks, the Korean Intellectual Property Office (KIPO) says the algae can play an important role in biofuel production and wastewater treatment. (image: Yonhap)

DAEJEON, Aug. 19 (Korea Bizwire) – Algae blooms are among the many side effects of this year’s prolonged heat wave in Korea. Major waterways like the Geum and Yeongsan rivers are suffering from extensive algal blooming, which can damage ecosystems as well as create an unpleasant stench.

But despite the apparent drawbacks, the Korean Intellectual Property Office (KIPO) says the algae can play an important role in biofuel production and wastewater treatment. KIPO officials pointed out that the number of patent applications for technology related to algae has increased steadily over the past decade.

While 80 percent of the patents are biofuel-related, the types of technology have also become more diverse over the years.

A large majority of earlier patents were related to either the process of producing biofuel from algae or equipment for cultivating algae. But with the development of genetic engineering, technology using algae with higher fuel production efficiency (18 patents from 2010 – 2014) or genetic manipulation technology to increase production output from the source material of algae (10 patents from 2010 – 2014) has also been introduced.

Although biofuel is generally produced from crops, cultivating algae from the ocean is more efficient in that it does not require water or a large land area. As algae absorbs carbon dioxide from the air for photosynthesis, it can also help to reduce greenhouse gas concentrations.

The KIPO also noted that even though biofuel-related patents are most common, the number of patents related to wastewater treatment technology using algae is also increasing steadily.

At the moment, about 25 percent of the cost of wastewater treatment is devoted to the electricity used to  supply oxygen to microorganisms. But using algae, which absorbs carbon dioxide and provides oxygen in return, can help save some of the costs.

“Of course there’s the cost of feed for algae to consider, before the use of new technology become widespread,” said a KIPO official. “But regardless, with growing research efforts on top of recent government-funded studies, the number of patents for technology making use of algae is expected to continue to increase.”