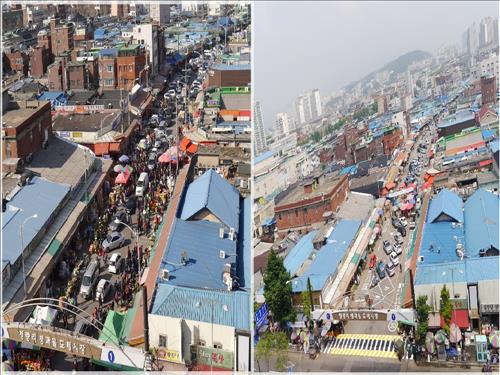 On June 13, the market began three days of work to add parking lines to the center of the road. In addition, the merchants at the market brought the stacked products from the aisles into their stores. With these efforts, shoppers can now look around comfortably in the market. (image: Yonhap)

SEOUL, June 29 (Korea Bizwire) – The most inconvenient aspects of Korean traditional markets are the lack of parking spaces and narrow aisles due to products stacked in the middle of the road.

Sometimes, people and vehicles get stuck together in the middle of the narrow aisles, and more and more people refrain from shopping at the markets and go to big-box retailers, where plenty of parking is available and one can shop in a spacious and comfortable environment.

Just two weeks ago, Gyeongdong Market, a traditional market near Cheongnyangni Station in Seoul, had similar problems as other traditional markets. It took more than 15 minutes by car to cover only 430 meters in the market due to cars parked in front of stores, stacked products and street stalls in any open space.

However, after simply moving parking spaces from the side of the road to the center, such inconveniences have gone away. The parking switch has made the market much more convenient to shop in, with more parking and improved traffic flow. Now, it only takes one or two minutes to pass through the market by car.

On June 13, the market began three days of work to add parking lines to the center of the road. In addition, the merchants at the market brought the stacked products from the aisles into their stores. With these efforts, shoppers can now look around comfortably in the market.

It took only three days to transform the market, but it took more than 10 years to decide to go ahead with the plan.

In the late 1990s, vendors at the market asked Dongdaemun-gu district office to relocate the parking spaces on the side of the road to the middle. However, the district office opposed the plan as there was no such precedent.

Under normal circumstances, the relocation of roads and parking spaces is completed by local government offices after consulting with the police. However, the district office got idle hands due to opposition from street vendors and some shop owners in the market, and a labor shortage.

However, active mediation by the police helped the work to be completed. The police found a solution by leading some 100 talks with merchants’ associations from the market and the district office, and finding common ground.

So far, the results have been satisfactory. According to Dongdaemun Police Station, which conducted a poll inquiring about the satisfaction rate of the parking space relocation, merchants and shoppers showed 77 percent and 92 percent satisfaction rates respectively.