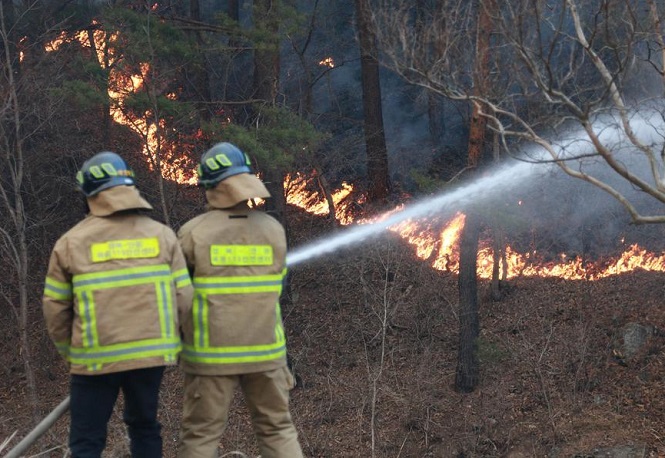 Firefighters work to extinguish a wildfire as it spread to a village in Uljin, North Gyeongsang Province, on March 5, 2022. (Yonhap)

SEOUL, May 13 (Korea Bizwire) — A new system has been established to allow rescue workers to verify on-site information on a real-time basis when they are dispatched to fire or disaster sites.

The National Fire Agency said Thursday it had completed and launched the on-site support system at the fire service headquarters in 18 cities and provinces.

When rescuers are on the way or arrive at disaster sites, the new system allows them to check on-site information, including the location of fire hydrants and the floor plans of surrounding buildings in real time through smart devices, thereby enabling them to respond in a faster and more effective way.

In case of a massive disaster, in particular, this system enables the sharing of on-site information even with firefighters from other cities or provinces who come to help, while allowing them to monitor how many and what firefighting resources are mobilized.

When a forest fire menaced the municipality of Uljin in March, the new system was used to monitor the information on firefighting vehicles and firefighters dispatched from across the country.

Launched in South Gyeongsang Province as a pilot project in 2016, the system was rolled out at all of the nation’s fire service headquarters this year.