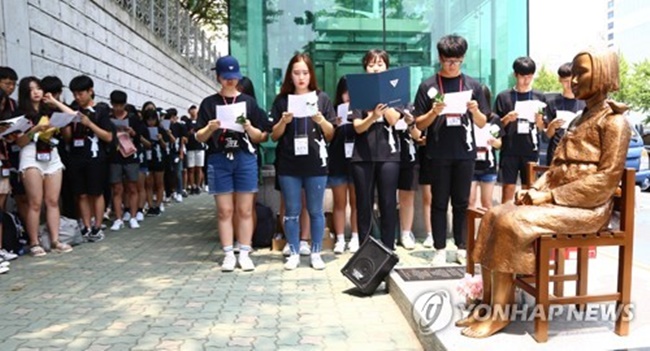 About 200 students hold a rally in Busan on July 24, 2017, to call for the nullification of a controversial comfort women deal with Japan. (Image: Yonhap)

SEOUL, July 25 (Korea Bizwire) – South Korea’s foreign ministry said that it is making preparations to launch a task force to review a controversial deal reached in 2015 with Japan to address a long-standing rift between the neighbors over Tokyo’s wartime sexual slavery of Korean women.

“(We) are in the middle of preparations for personnel composition of the task force. It has yet to be finalized,” ministry spokesman Cho June-hyuck said during a regular press briefing. “It will be launched sooner or later.”

In December 2015, the two neighbors reached a deal to resolve the issue with an apology and compensation from Tokyo. Under the deal, Japan injected 1 billion yen (US$9 million) into a South Korean foundation for sex slavery victims in exchange for ending bilateral feuds on the issue.

In a telephone conversation with Japanese Prime Minister Shinzo Abe in May, President Moon Jae-in said that most South Koreans cannot accept it emotionally. The foreign ministry earlier said that it is set to form a team that will conduct the review of the deal.

The spokesman said that the so-called reconciliation and healing foundation launched last year based on the money contributed by Japan will continue to do its intended business until the government’s “stance” on the 2015 deal is finalized.

Rumors have swirled that the foundation could be dissolved as its chairwoman recently offered to resign.

Historians estimate that up to 200,000 Asian women were mobilized by the Japanese military to work in front-line brothels during World War II. They are euphemistically called comfort women.

On Sunday, a South Korean woman forced into sexual servitude died at the age of 91, bringing the number of living victims of Japan’s wartime atrocity to 37, most of whom are in their 80s and 90s.