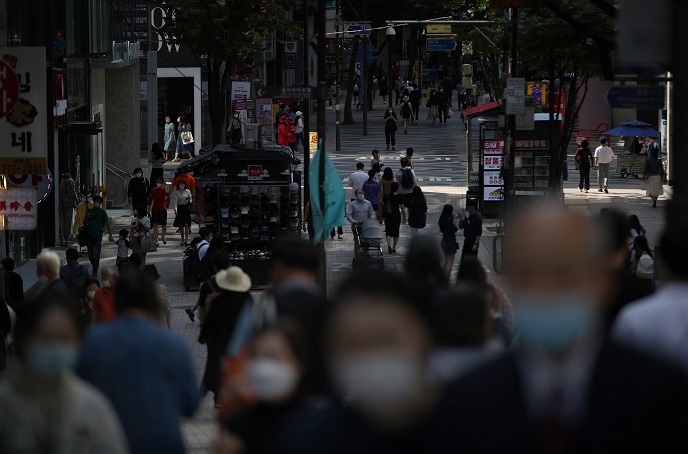 SEOUL, Sept. 20 (Korea Bizwire) — South Korea’s daily new coronavirus cases dipped below 100 for the first time in more than a month on Sunday on the back of the strict social distancing scheme, but the country opted to extend the measure by another week as untraceable infections still pose a challenge to its virus fight.

The country added 82 more COVID-19 cases, including 72 local infections, taking the total caseload to 22,975, according to the Korea Disease Control and Prevention Agency (KDCA).

It marked the first time for the daily tally to fall below 100 since Aug. 13.

The country’s new daily infections have been in the triple digits for more than a month on a surge in cases tied to a church in northern Seoul and an anti-government rally in mid-August.

On Sunday, the country decided to extend nationwide virus curbs that have been under way since late August by another week as untraceable cases, coupled with cluster infections, persist ahead of the Chuseok holiday.

Under the decision, the country will maintain the Level 2 social distancing scheme, which has been in place since Aug. 23, for all areas of the country through Sept. 27. The measures were originally set to end on Sunday. 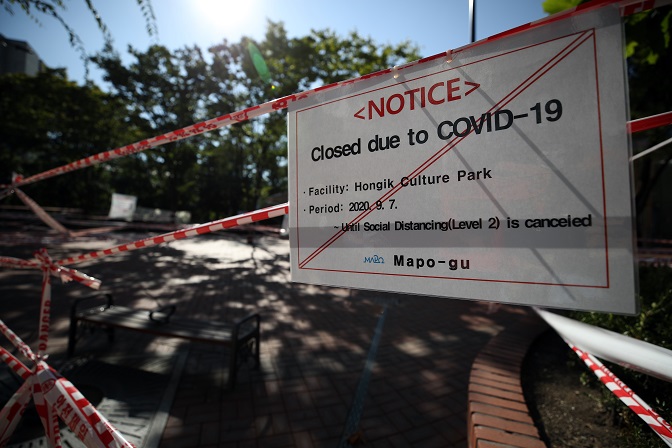 A park located in the Mapo Ward of Seoul is closed on Sept. 20, 2020, to prevent the spread of the new coronavirus. (Yonhap)

The upcoming Chuseok fall harvest holiday that falls later this month, a tradition that entails mass movements of people and family gatherings, is also among the major concerns for local health authorities.

“With about a week remaining before Chuseok, the risk of loosening the distancing guideline, such as expansion of virus transmissions, far outweigh the benefits it may bring,” Health Minister Park Neung-hoo said during a briefing.

South Korea has been urging people to stay home over the Chuseok period, saying that elderly people are more vulnerable to virus infections and the chance runs high for them to fall into serious or critical condition if they are infected.

Officials are also seeking to revise the country’s current three-tier social distancing system to reflect key data other than the number of new daily infections, such as the number of critical patients and the fatality rate from COVID-19.

Of the additional locally transmitted cases, 28 came from Seoul, and 24 were reported from the surrounding Gyeonggi Province. Incheon, located west of Seoul, added three more patients.

Infections tied to last month’s anti-government rallies came to 616 as of Sunday, up three from the previous day.

Cases tied to production lines of Kia Motors Corp. in Gyeonggi Province reached 18, up two from a day earlier. 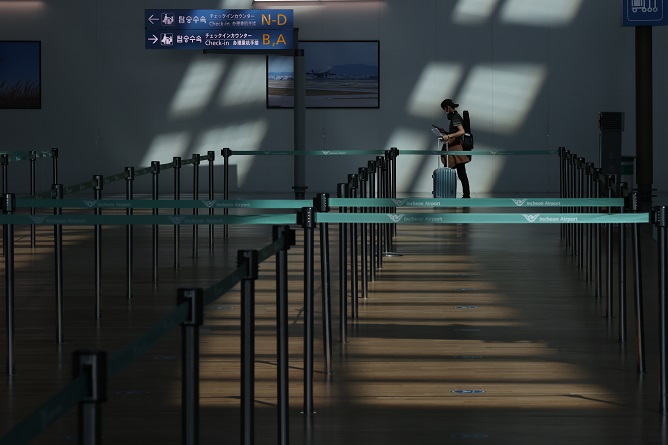 The departure hall of Incheon International Airport located in Incheon, west of Seoul, is nearly empty on Sept. 20, 2020. (Yonhap)

The number of imported cases came to 10.

Three patients were from India, and two more infection cases came from Turkey. There were also cases traced to Indonesia, Iraq, Japan, Germany and the United States.

The death toll rose by five to 383. The fatality rate reached 1.67 percent.

Health authorities are concerned that the number of deaths may rise further down the road as most of the patients in critical condition are seniors.

Of the reported deaths, more than 80 percent of the victims were aged 70 and above. Two were in their 30s.

The number of patients in serious or critical condition came to 146, down six from the previous day.

A total of 20,158 people has been released from quarantine after making full recoveries, up 188 from the previous day. More than 87 percent of the patients reported here have been cured.