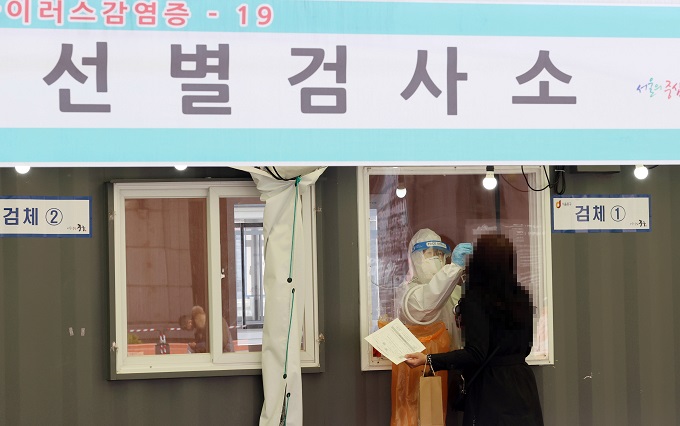 A medical worker carries out a coronavirus test on a woman at a testing station near Seoul Station in Seoul on March 30, 2021. (Yonhap)

The country added three more deaths from COVID-19, increasing the total to 1,729.

In South Korea, a third wave of infections, which began in mid-November last year, has shown little signs of slowing down, with the nation reporting daily cases that have hovered around 400 over the past week.

Ahead of the Easter weekend and by-elections next week, health authorities have urged people to comply with distancing rules.

As of Monday, the reproduction rate fell to 0.94, which indicates that a single COVID-19 patient transmits the disease to fewer than one person. A day earlier, the rate was 1.85.

The number of new cases as of 9 p.m. Tuesday had surpassed 400, with health officials and regional authorities reporting 439 infections. It was an increase of 58 from the same time Monday.

Daily new cases are counted until midnight and then announced the following morning. On Monday, South Korea added 66 cases between 9 p.m. and midnight.

Sohn called for people not to let their guard down in the battle against the new coronavirus, while appealing to them to strictly comply with mask requirements and other containment rules. 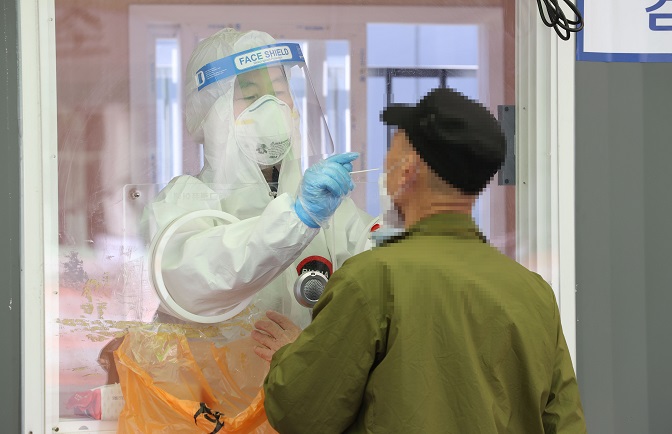 A medical worker carries out a coronavirus test on a man at a testing station near Seoul Station in Seoul on March 30, 2021. (Yonhap)

The KDCA said South Korea has not been considering export restrictions of the South Korean-made vaccine.

To contain the continued rise in new infections, health authorities extended the current Level 2 social distancing rules in the greater Seoul area, where more than half of the country’s overall population resides, and Level 1.5 for the rest of the country for another two weeks until April 11.

Bans on gatherings of five or more people will continue, and restaurants and other public facilities in the greater Seoul area will be allowed to remain open till 10 p.m.

Since Feb. 26, when the country initiated its vaccination program, a total of 822,448 people have been given COVID-19 vaccine shots, including 26,538 people on Monday.

A total of 10,485 cases of side effects after vaccinations have been reported, though 10,348 of them were mild symptoms.

A total of 22 deaths after vaccinations have been reported, according to the KDCA.

South Korea seeks to vaccinate 12 million people by June, and it aims to achieve herd immunity by November.

AstraZeneca COVID-19 shots for citizens aged 65 and older began earlier last week, and Pfizer vaccines are to be administered to people aged 75 and older starting next month.

Incheon, 40 kilometers west of Seoul, reported 18 more cases. The number of imported cases came to 18, up from 14 the previous day.

Cases tied to a sauna in Seoul’s Guro Ward rose by 16 to 17, with cases involving an entertainment facility in Busan up 19 to 90 and cases related to a farm in Jeonju, North Jeolla Province, up 12 to 13.

The number of patients with serious symptoms across the country reached 102, up from 102 the previous day, the KDCA said.

The total number of people released from quarantine after making full recoveries moved up 439 to 94,563.