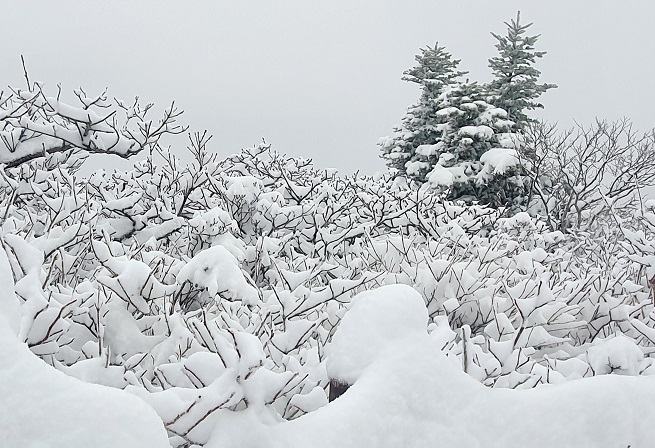 Mount Seorak in the northeastern province of Gangwon is covered with snow on April 30, 2021, in this photo provided by Seoraksan National Park Office.

Late-night rain turned into snow in the Gangwon mountains 1,300 meters above sea level early Friday morning, with 15 centimeters of snow recorded on and around the peak of Mount Seorak, about 200 kilometers east of Seoul, as of 9 a.m., according to national park officials there.

Gangwon’s non-mountainous areas were drenched in rain, with precipitation reaching 29 mm in the eastern coast city Gangneung, 28 mm in the northeastern border county Hwacheon, 23.7 mm in Hongcheon and 22.2 mm in Sokcho, according to the Korea Meteorological Administration (KMA).

The Jungcheong Shelter of Mount Seorak in the northeastern province of Gangwon is covered with snow on April 30, 2021, in this photo provided by Seoraksan National Park Office.

Strong winds blowing at the maximum instantaneous speed of over 20 mps caused destruction of outdoor signboards, building structures and street trees early Friday morning, but no casualties were reported.

Elsewhere in the country, the KMA forecast scattered rain and cloudy weather over the weekend, with daily highs ranging from 14 C to 22 C.