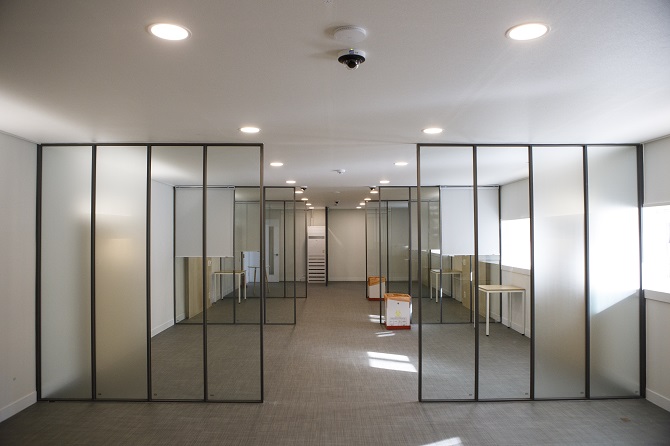 A few partitions are installed inside of the COVID-19 central vaccination center in central Seoul where medical workers will be inoculated for the new coronavirus starting in February, in this photo provided by National Medical Center on Jan. 29, 2021.

SEOUL, Jan. 29 (Korea Bizwire) — South Korea’s daily new coronavirus cases fell back to below 500 again Friday due to fewer tests amid cold weather despite a continued rise in clusters tied to religious facilities, which has put health authorities in a more prudent mode about relaxing virus curbs.

The country added 469 more COVID-19 cases, including 445 locally transmitted infections, raising the total caseload to 77,395, according to the Korea Disease Control and Prevention Agency (KDCA).

The figure was down from 497 on Thursday. The daily new cases stood at an average of 430 over the past week, rising from the 300s the previous week, due to clusters traced to religious education facilities across the country.

Of some 2,000 potential virus cases related to 40 religious education facilities affiliated with the IM missionary society based in Gwangju, 329 kilometers south of Seoul, a total of 355 confirmed cases were reported from seven facilities, up 15 from Thursday, according to the health authorities.

The Daejeon city government filed a complaint against the head of the missionary group, and the chief of the IEM School in the central city, one of the schools run by IM, for violating health protection guidelines.

A total of 176 virus patients have been confirmed in relation to the school.

New cluster infections were reported across the country. A welfare facility in Seoul reported 35 virus cases, with a church in Gwangju identifying 54 confirmed cases.

Due to a continued rise in cluster infections from religious facilities, authorities pushed back their decision on whether to extend or ease the current social distancing measures to the weekend.

Health authorities said they will make public their adjusted social distancing measure Sunday, which will be applied next month.

The announcement is expected to include special steps to curb the spread of the virus during the Lunar New Year holiday slated for Feb. 11-13. 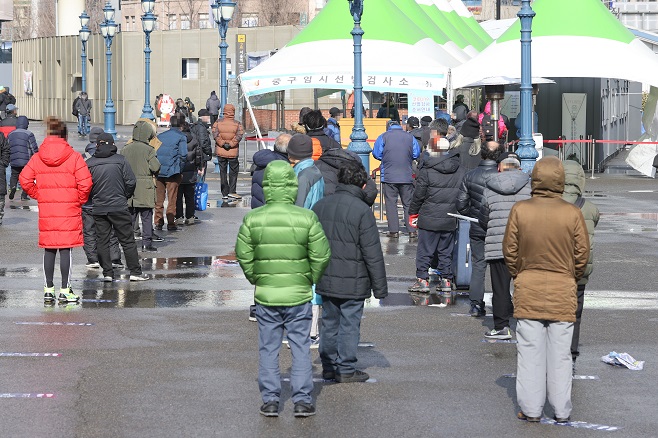 Citizens line up in front of a temporary screening center at Seoul Station Plaza on Jan. 28, 2021. (Yonhap)

As of 9 p.m. Friday, an additional 384 new cases were confirmed, down from 398 tallied in the same time period a day earlier. New cases are counted until midnight each day and announced the next morning.

Level 2.5, the second highest in the country’s five-tier scheme, has been applied in the greater Seoul area since early December, with Level 2 in other areas. Bans on gatherings of five or more people have been in place across almost the entire country.

Of the additional locally transmitted cases, 109 came from Seoul and 129 were reported from Gyeonggi Province that surrounds the capital. Incheon, 40 km west of Seoul, reported 18 more cases.

The three areas account for around half of the nation’s population.

The number of imported cases came to 24, up from 18 the previous day. They included 13 from the United States and four from Indonesia.

The country added 13 more deaths, raising the total to 1,399. The number of patients with serious symptoms across the country reached 239, down from the previous day.

The total number of people released from quarantine after making full recoveries moved up 487 to 66,503.