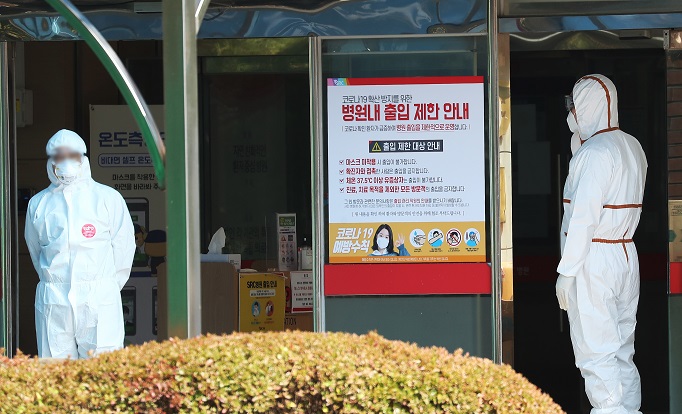 The country added 73 more COVID-19 cases, including 62 domestic infections, raising the total caseload to 25,108, according to the Korea Disease Control and Prevention Agency (KDCA).

It marked a rise from 47 daily cases Friday but a decline from 110 cases Thursday, when more than 50 reported cases were tied to a nursing home in the southeastern port city of Busan.

New virus cases dropped below the 50 mark for the first time since Sept. 29 on Friday, but health authorities remain vigilant about a potential spike in sporadic cluster infections amid relaxed social distancing measures.

“We cannot lower our guard against the virus as cluster infections continued to pop up at facilities in Busan and Gyeonggi Province (that surrounds Seoul),” Kwon Joon-wook, deputy director of the Central Disease Control Headquarters, said in a press briefing.

He expressed concerns that young people may spread the virus quietly through visits to entertainment facilities and restaurants.

On Monday, the country relaxed its tougher virus curbs by one notch to the Level 1 social distancing measures in its three-tier scheme as new virus cases slowed down after a resurgence.

Daily infections had been in the triple digits for more than a month since Aug. 14. New virus cases have largely slowed down on the back of weekslong stricter virus curbs put in place in late August.

This month, daily infections underwent ups and downs, with virus cases rising above 100 sometimes. Health authorities called on people not to lose their guards as a flare-up in virus infections can happen anytime with sporadic outbreaks.

Health authorities are concerned about a potential uptick in virus cases as people are expected to travel during the peak autumn foliage season.

Of the newly identified local infections, 17 cases were reported in Seoul and 32 cases in Gyeonggi Province. Incheon, west of Seoul, reported one more case.

The country has continued to report cluster infections tied to nursing homes, hospitals and other facilities following the latest Chuseok fall harvest holiday in early October. 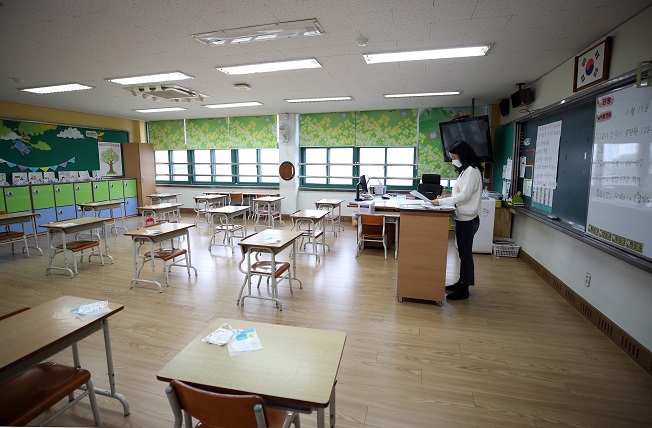 A teacher at an elementary school in central Seoul prepares for soon-to-be resumed offline classes on Oct. 16, 2020, as the education ministry eased attendance caps for schools amid relaxed virus curbs. (Yonhap)

Cases tied to a discount store chain in eastern Seoul came to eight as of noon, up one case from the previous day.

Infections traced to a rehabilitation hospital south of Seoul reached 32, up one case over the past 24 hours. Virus tests are being conducted on 244 people.

Cases related to a nursing home in Busan added one case to 59.

Untraceable cases accounted for 16.5 percent of the total cases reported over the past two weeks, down from 16.8 percent the previous day.

The country, meanwhile, added 11 imported cases, increasing the total to 3,487. Three cases came from Poland, followed by two from India and another two from Russia.

The number of seriously or critically ill COVID-19 patients came to 84 as of midnight, down one from the previous day.

The country has so far administered remdesivir, an experimental drug conventionally used for Ebola, to 618 coronavirus patients in critical condition here, according to the KDCA.

Health authorities said they do not see the need to immediately revise the guidelines on the use of remdesivir amid global controversy over its efficacy in treating coronavirus patients.

At least 11 cases of possible remdesivir side effects have been reported in South Korea.

The total number of people released from quarantine after making full recoveries stood at 23,258, up 78 from the previous day.