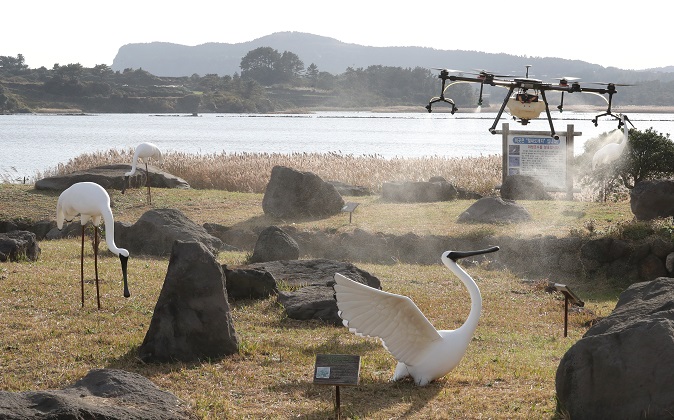 A drone sprays disinfectant at a seasonal home for migratory birds on South Korea’s southern Jeju Island on Nov. 23, 2020, following the detection of a highly pathogenic avian influenza strain in the region. (Yonhap)

JEJU, Sept. 14 (Korea Bizwire) — The southern resort island of Jeju was designated a special drone zone in February by the Ministry of Land, Infrastructure and Transport, and since then drones have been playing an important role in various search activities on land, but also at sea.

The Jeju Coast Guard and the Seoguipo Coast Guard have each formed and are operating a private drone search team.

The move is a part of efforts to search and monitor sites such as reefs and seashore cliffs that are usually inaccessible to search and rescue teams.

The drone search team participates in various activities, including searching for missing persons in coastal accidents, monitoring terrestrial sites that are difficult to access, and conducting preventive patrols when the risk is high for accidents, including the occurrence of typhoons.

The guardian map is now used for rescue operations.

In addition, the Jeju provincial government used disinfection drones in July to prevent the spread of pine wilt disease as well as to spray disinfectant around pine forests.

The provincial government said that disinfection drones can spray disinfectants at a height of less than 10 meters above pine trees, minimizing the damage that can be caused by the spread of disinfectants while ensuring targeted and precise application.