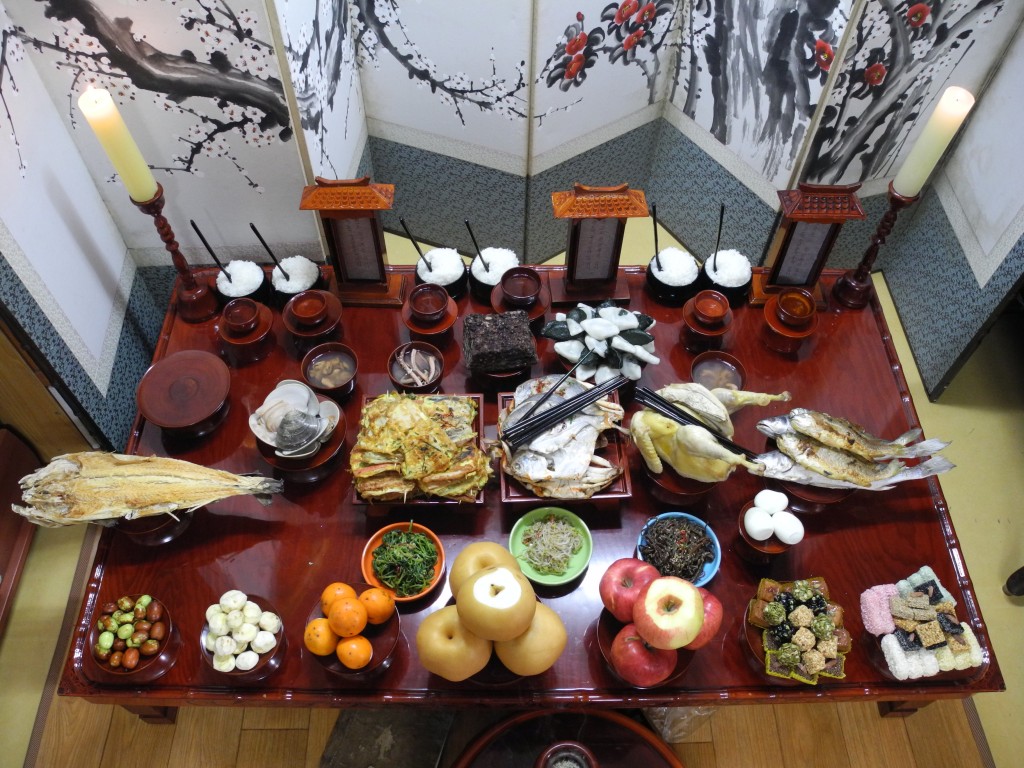 Ceremonial table, offering food to ancestors as part of a traditional ritual. The ritual is still carried out by most Koreans on the morning of Chuseok. (image: Wikimedia)

SEOUL, Sept. 5 (Korea Bizwire) – Chuseok, also referred to as Korean Thanksgiving, is one of the two major traditional holidays in Korea with the other being Lunar New Year. It is also the time for families to visit their hometowns, meet their parents and relatives, and catch up.

However, it has become a stressful time for some, especially for youth struggling to find work amid economic hardships and changing social values.

A 34-year-old office worker referred to only as “A” from Cheongju decided to volunteer for a holiday shift for the coming Chuseok holiday (September 14 – 16). In the eyes of Korea’s older generation, she has passed her rightful age for marriage, and relatives never fail to ask her about her marriage plans when they gather for traditional holidays.

Although she herself is not at all concerned about her marital status, she’s had enough of her relatives’ prying questions on the future “other half”. So she chose to stay behind and reap the financial benefits of working on a holiday, which in her words is “killing two birds with one stone”.

“Just a couple of years ago, I used to meet up with old friends during holidays and we would chat our stress away, but most of them got married and it’s difficult for me to meet them anymore,” said “A”. “And even when I do meet my married friends, a large portion of the conversation subjects are about family life and children, so I sort of feel left out.”

Things are worse for college graduates who have yet to find jobs. With more young Koreans struggling to find a career amid a record high youth unemployment rate (10.6 percent) this year, giving relatives a job status update is a painful experience.

Among them is 29-year-old “B”, who is studying for a government exam. He has also decided to stay behind for the coming Chuseok, and found himself a part-time job.

“It’s difficult to face questions like ‘how’s your studying going?’ or ‘do you think you’ll pass this year?’, and I even feel a sense of guilty conscience,” said “B”. “It’s going to be hard studying during the holiday anyways, so I decided to work at a friend’s restaurant for a few days.”

“It’ll be lonely spending Chuseok away from family, but it’s better than the mental torture,” he said with a bitter smile.

In fact, a recent survey by Expedia revealed that those in their 20s were most stressed about questions related to marriage and jobs during traditional holidays. In another study by job search platform SaramIn, 30.4 percent of job seekers said “have you found a job?” was the question they dreaded hearing the most during the holidays.

Due to the uncomfortable and stressful circumstances associated with traditional holiday celebrations, some Koreans have even decided to avoid meeting their relatives altogether.

According to travel agency Hana Tour, 26,500 people made reservations (as of August) for overseas travel during this year’s Chuseok, which is an increase of 29 percent compared to last year.

“Overseas travel packages for these major holidays have become increasingly popular among the younger generation, with their changing perspectives on traditional holidays,” said a travel industry official.