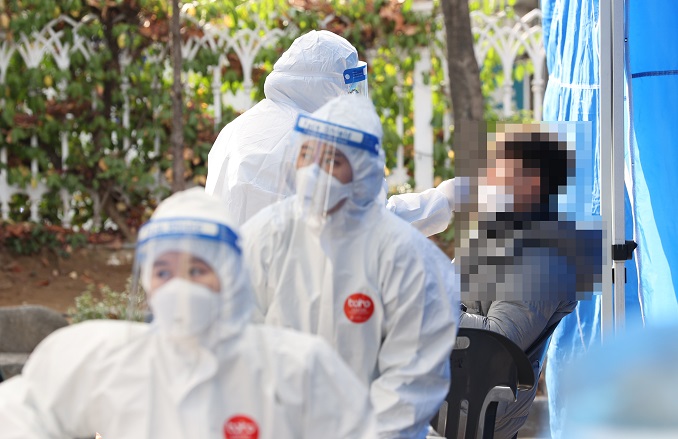 The country added 382 more COVID-19 cases, including 363 local infections, raising the total caseload to 31,745, according to the Korea Disease Control and Prevention Agency (KDCA).

The daily caseload has stayed in the triple digits since Nov. 8, with the figure over 300 from Wednesday to Sunday before dropping to 271 on Monday due to less testing on the weekend. However, it bounced back to 349 cases Tuesday.

The new virus cases are expected to exceed 400 on Thursday, as 336 confirmed cases had been tallied across the country on Wednesday as of 6 p.m., according to health authorities and local governments.

The figure was up 53 from the same time of the previous day. Of them, 216 were reported in greater Seoul, with 120 reported in other areas.

Health authorities called for stronger action before a nationwide college exam on Dec. 3 as they warned a third wave of the pandemic is under way due to cluster infections from private gatherings, public facilities, hospitals and the military.

To curb the recent surge of the novel coronavirus, the authorities raised the social distancing level by one notch to Level 2, the third-highest in the country’s five-tier system, in the Seoul metropolitan area, where the majority of virus cases have been identified, for two weeks starting on Tuesday.

Other municipalities also have been enforcing tougher distancing rules depending on their virus situation. Level 1.5 distancing is currently in place in Gangwon Province and the country’s southwestern Jeolla region.

But as the country’s virus infections show no signs of letup, health authorities said they could review an option of imposing Level 2 distancing rules nationwide.

Level 2 curbs can be enforced if the country’s daily number of local infections exceeds 300 for a week.

The daily average figure of domestic infections stood at 316.3 in the most recent one-week period, with an average of 222 of them coming from the capital area.

“Our first task is to curb virus infections in the greater Seoul area,” Sohn Young-rae, a senior health official, said at a briefing. “We will assess the effectiveness of tightened social distancing rules before looking into nationwide measures.”

Under Level 2, the third highest in the country’s five-tier virus alert system, nightclubs and other high-risk entertainment facilities must suspend their business, while wedding and funeral halls should restrict visitor numbers to a maximum of 100.

Domestic infections were at the highest level since late August on Tuesday, with most of them coming from the greater Seoul area, home to nearly half of the nation’s population. 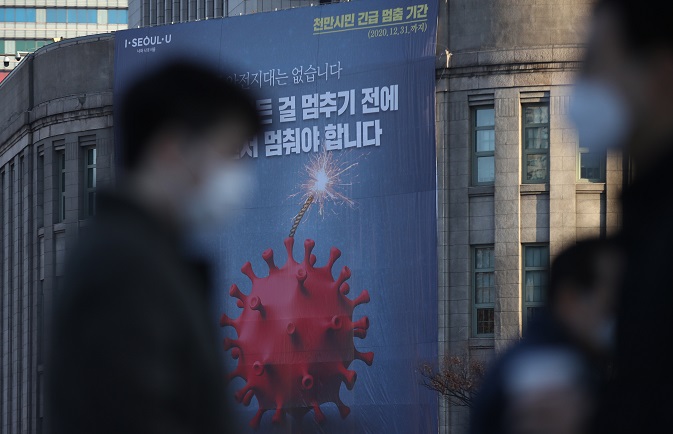 Of the new locally transmitted cases, 255 were identified in the greater Seoul area, the KDCA said. The capital region registered over 200 virus cases for the sixth straight day.

Of the 17 major cities and provinces, only Sejong, the central administrative city, did not report additional virus cases.

Among virus clusters, a sauna facility in southern Seoul added nine more cases, bringing the total to 71, while a hospital in western Seoul reported five additional cases, raising its total to 39.

An additional 15 people tested positive in cases traced to a high school in eastern Seoul and a church in western Seoul, raising the total to 114.

An indoor playground for children in Yongin, south of Seoul, was traced to seven more cases, bringing the total to 80.

The number of cases connected to a traditional Korean drum class in Busan and Ulsan increased by 23 to 47.

A total of 48 new coronavirus cases have been confirmed at an aerobics center in western Seoul since Tuesday, the local ward office said.

Of the new infections from overseas, eight of them were from the United States, followed by Russia, Denmark and Azerbaijan with two each.

The country reported three additional deaths from COVID-19, raising the total to 513. The fatality rate was 1.62 percent.

The number of seriously or critically ill COVID-19 patients came to 81, up two from a day ago.

Health authorities warned that if the current virus situation persists, the number of hospital beds for critically ill COVID-19 patients may be insufficient in two or three weeks.

There are currently 115 hospital beds available for virus patients in critical condition, they added.

The total number of people released from quarantine after making full recoveries stood at 26,825, up 103 from the previous day, with 4,397 people isolated for COVID-19 treatment, up 276 from a day ago.