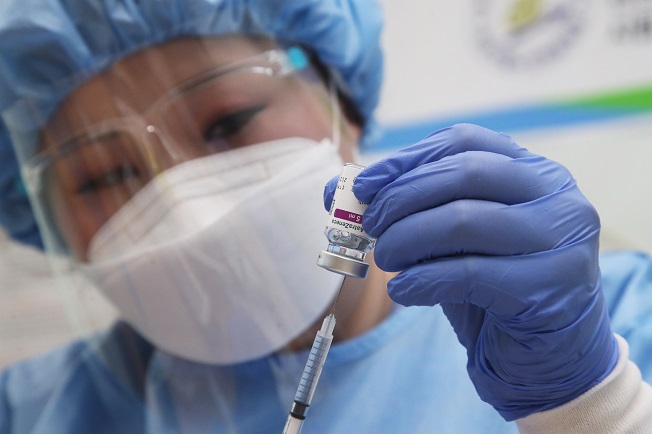 A health worker clad in a protective suit prepares for an inoculation with AstraZeneca’s coronavirus vaccine at a hospital in Ansan, south of Seoul, on Feb. 26, 2021. (Yonhap)

The country reported 406 more virus cases, including 382 local infections, raising the total caseload to 88,922, according to the Korea Disease Control and Prevention Agency (KDCA).

Friday’s daily caseload marks a slight uptick from 396 tallied the previous day. The figures hovered above 600 last week before falling below 500 over the weekend and under 400 earlier this week on fewer tests.

The country began its vaccination campaign starting with health care workers and patients at nursing facilities and hospitals across the nation. They were inoculated with the vaccine developed by AstraZeneca.

South Korea plans to administer Pfizer’s vaccine from Saturday, with medical workers getting the jab first.

The country hopes to attain herd immunity by November.

The greater Seoul area, home to around half of the nation’s 52-million population, currently is under Level 2 distancing, which is third highest in the five-tier virus curbs.

Under the current virus curbs, restaurants and bars in the capital area are allowed to remain open for an hour longer until 10 p.m.

“As we begin vaccinations, we need to be careful on easing social distancing rules,” Sohn Young-rae, a senior health official, said in a briefing. “If we let our guard down, it is possible that virus infections can surge again.”

Health authorities said that a draft of a new social distancing system will be unveiled next week and that they will receive public opinions before finalizing it. 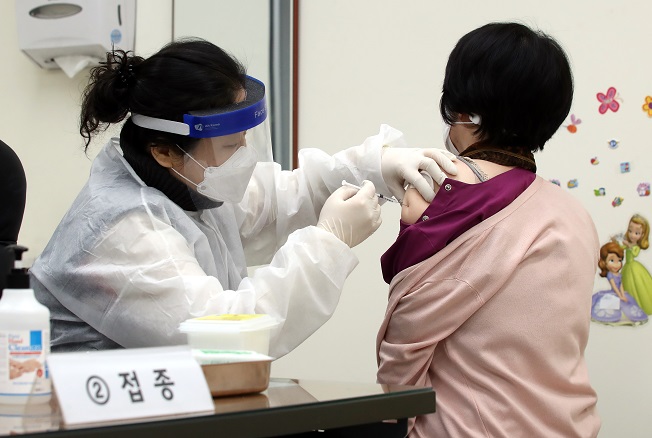 A citizen (R) receives a shot of AstraZeneca’s COVID-19 vaccine at a public health center in Incheon, 50 km west of Seoul, on Feb. 26, 2021, when the country kicked off its nationwide vaccinations at 9 a.m. More than 5,000 medical workers and patients aged under 65 at long-term care facilities were the vaccine’s first recipients. (Yonhap)

Of the 382 locally transmitted cases, 129 cases were reported in Seoul and 135 in the surrounding Gyeonggi Province. Incheon, which lies west of the capital city, added 14 more cases.

Among virus clusters, a hospital in central Seoul added 19 more cases, raising the caseload to 250.

A plastic factory in Namyangju, north of Seoul, reported two additional patients, raising its total to 189.

The number of cases tied to a heater manufacturing plant in Asan, South Chungcheong Province, rose by six to 192 cases.

There were 24 more cases from overseas, raising the number of imported cases to 7,014.

Of the new imported cases, five were from the United States.

The number of seriously or critically ill COVID-19 patients stayed unchanged at 144.

The total number of people released from quarantine after making full recoveries was 79,880 up 393 from a day earlier, with 7,457 people being isolated for COVID-19 treatment, up nine from a day ago.

As of 9 p.m. on Friday, South Korea added 374 new cases, 12 more than at the same time the previous day. Of the total, 300 cases were confirmed in the greater Seoul area.

The number raises the possibility that the country’s daily virus tally will stay above 400 on Saturday.