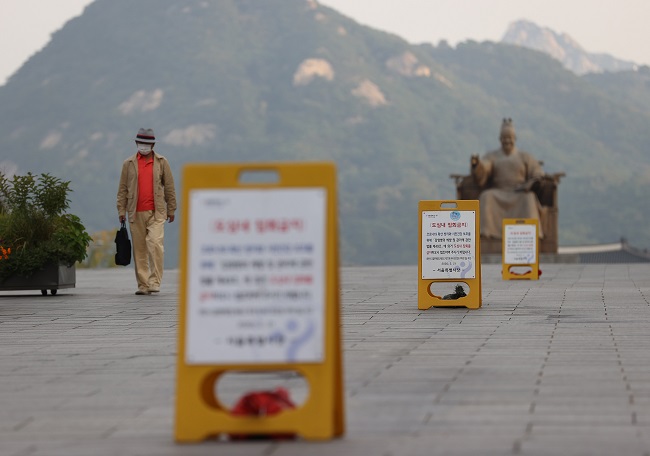 A signboard in central Seoul says the government bans rallies amid the novel coronavirus pandemic on Sept. 29, 2020. (Yonhap)

SEOUL, Sept. 29 (Korea Bizwire) – South Korea’s new coronavirus cases fell below 50 on Tuesday for the first time since early August, but the country remains vigilant against possible cluster infections during a major holiday this week.

The country added 38 more COVID-19 cases, including 23 local infections, bringing the total caseload to 23,699, according to the Korea Disease Control and Prevention Agency (KDCA).

The daily new cases are the lowest in 49 days since Aug. 11, when the country reported 34 cases, just before a new cluster of infections emerged from a church and an anti-government rally in Seoul on Aug. 15.

Daily new local infections also stayed in double digits for the fifth straight day after the country reported 95 on Friday, 49 on Saturday, 73 on Sunday and 40 on Monday, the KDCA said.

“However, the country should not be at ease, as virus tests by private medical facilities tend to be fewer on the weekend than weekdays.”

Health authorities said the country’s coronavirus reproduction rate came below one, apparently on the back of a strengthened social distancing campaign.

The rate reflects the number of people that a single patient can infect.

Despite the fall in new virus cases, health authorities remain vigilant ahead of the Chuseok holiday, the autumn harvest celebration, which runs from Wednesday to Sunday.

Tens of millions of people are expected to travel across the country for family gatherings.

The country also has a three-day break from Oct. 9 to 11, when Hangeul Day, which celebrates the Korean alphabet, is combined with the weekend, prompting the government to designate Monday to Oct. 11 as a special period for strengthened virus curbs.

Health authorities have been urging people to stay home over the holidays, but to better contain local transmissions of COVID-19, they unveiled more tailored guidelines last week under the Level 2 distancing in the country’s three-tier scheme. 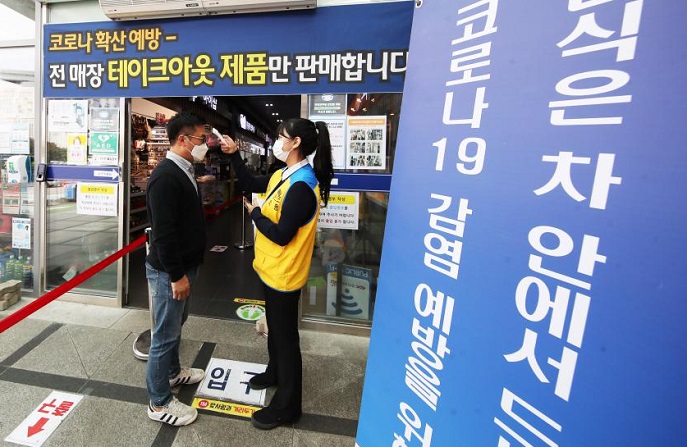 Workers take the temperature of visitors at a restaurant at a rest station on the Seoul-Busan Expressway in Giheung, south of Seoul, on Sept. 29, 2020, ahead of the Chuseok holiday on Oct. 1. People cannot dine at any highway restaurants from Sept. 29-Oct. 4, with only takeout available to prevent the spread of COVID-19. (Yonhap)

By region, Seoul added 11 new virus cases, and nearby Gyeonggi Province had six new patients, according to the KDCA.

It marks the first time since Aug. 11 that daily new cases from the wider Seoul area recorded below 20.

Cases traced to a nursing hospital in Seoul’s northern ward of Dobong came to 29, up two from a day earlier, it said.

A total of 13 infections were tied to a music school in Anyang, south of Seoul, up two from a day earlier.

The number of seriously or critically ill COVID-19 patients stood at 115, down five from the previous day, according to the authorities.

The KDCA said a total of 497 COVID-19 patients in critical condition have been given remdesivir, an experimental drug conventionally used for Ebola.

The country also reported 15 new imported cases, up from 10 a day earlier, the KDCA said.

South Korea reported one additional death, raising the death toll to 407. The fatality rate was 1.72 percent.

The total number of people released from quarantine after making full recoveries stood at 21,470, up 178 from the previous day.