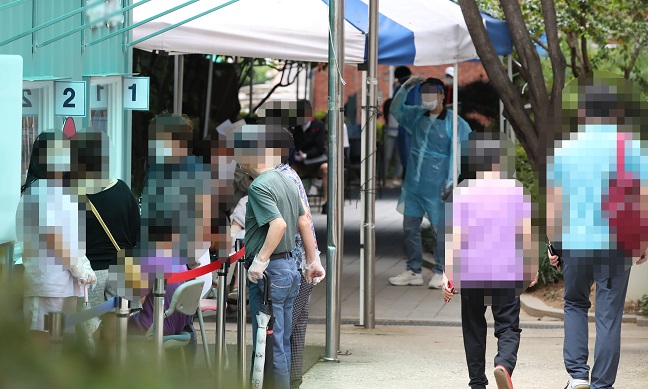 Citizens wait in line to receive COVID-19 tests at a virus screening clinic in Seoul on Sept. 17, 2020. (Yonhap)

The country added 153 more COVID-19 cases, including 145 local infections, raising the total caseload to 22,657, according to the Korea Disease Control and Prevention Agency (KDCA).

The figure marks a sharp rise from 113 cases reported Wednesday, 106 cases Tuesday and 109 cases Monday. It is the highest daily tally since Friday, when the country identified 176 cases.

The number of daily new virus cases have been slowing down to some extent on the back of tougher social distancing measures, but rises in cases with unknown infection routes and cluster infections continue to weigh on the virus fight.

Over the past two weeks, the number of cases with unclear transmission routes reached a new record high of 26.4 percent of the total new cases.

Health authorities target to bring the daily new cases down to below 100. The daily tally of COVID-19 cases has been under 200 for more than two weeks.

Of the newly identified local infections, 62 cases were reported in Seoul and 52 in Gyeonggi Province that surrounds the capital. Incheon, west of Seoul, reported seven more cases.

More than 40 COVID-19 patients were reported throughout Thursday from the capital city. The cases will be added to Friday’s tally.

So far, 604 cases have been reported from the Aug. 15 demonstration in central Seoul, with 331 cases identified in 11 different provinces and municipalities outside the greater Seoul area.

Infections tied to Severance Hospital in western Seoul reached 46. The number of cases traced to an herb business event in Daegu increased to 58. 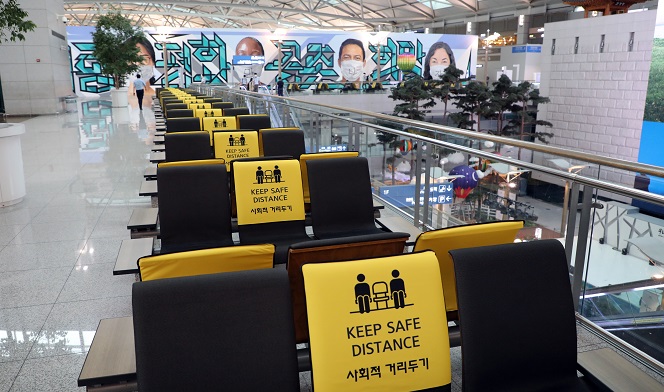 At least 11 cases were tied to Kia Motors Corp.’s plants in Gyeonggi Province, spawning concerns that more related cases may come down the road.

“From last week, we believe the country is seeing a downward trend in virus cases, but there could be a temporary uptick,” Yoon Tae-ho, a senior health official, said.

To better contain the resurgence of COVID-19, the country adopted an enhanced social distancing scheme, called Level 2.5 guidelines, in the densely populated Seoul metropolitan area on Aug. 30 and applied it for two weeks.

But due to mounting economic pains for the self-employed and small merchants, the country decided to ease the tougher virus curbs Monday in the greater Seoul area for the next two weeks.

Health authorities said they will soon decide whether to adjust the nationwide level of social distancing. Currently, the Level 2 virus curbs are in place nationwide.

There were five additional deaths from COVID-19, raising the death toll to 372. The fatality rate was 1.64 percent. Four additional deaths were reported later on Thursday, which were not yet reflected on the official tally.

But the country could see more deaths, as the number of seriously or critically ill COVID-19 patients came to 160 as of midnight. Of them, 137 patients were aged 60 or older.

The total number of people released from quarantine after making full recoveries stood at 19,543, up 233 from the previous day, with 2,742 people isolated for COVID-19 treatment, down 85 from a day ago.

KDCA chief Jeong Eun-kyeong said the country is reluctant to use rapid COVID-19 test kits for the final diagnosis of the virus due to accuracy problems, adding that the World Health Organization and the U.S. Centers for Disease Control and Prevention also do not recommend using such kits for virus testing.