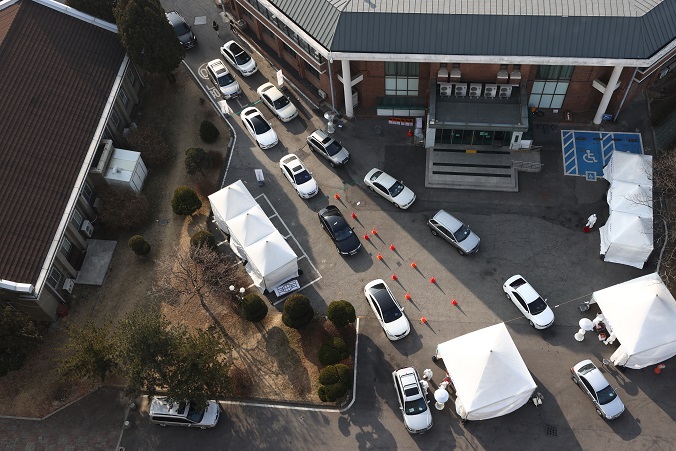 SEOUL, Dec. 27 (Korea Bizwire) — South Korea’s daily new coronavirus cases fell below 1,000 on Sunday, due mainly to less testing over the weekend, as the government opted not to raise social distancing rules to the toughest level with a renewed plea for citizens’ strict adherence to antivirus steps.

The country added 970 more COVID-19 cases, including 946 local infections, raising the total caseload to 56,872, according to the Korea Disease Control and Prevention Agency (KDCA).

Fifteen people died from COVID-19 in the past 24 hours, raising the death toll to 808.

On Sunday, as of 6 p.m., the number of new virus cases was tallied at 559, down 103 from Saturday’s tally during the same time period. Of the total, 362 cases, or 64.8 percent, were from the greater Seoul metropolitan area, including 180 in the capital.

Later in the day, health authorities decided to extend the current Level 2.5 social-distancing restrictions in the greater Seoul area until Jan. 3, opting not to raise them to the highest level in the five-tier system.

In the rest of the country, Level 2 restrictions, the third highest level, will be applied until Jan. 3, officials said.

Although the nation’s daily new virus cases have hovered around 1,000, the government has sought to bring the winter wave under control without raising virus curbs because it would deal a severe blow to millions of small merchants.

The strongest-ever measures have been applied nationwide since last Thursday as well.

Ski resorts and famous tourism venues were shut down to slow the spread of the virus during the Christmas and New Year’s holiday season.

To help find unconfirmed infections with no symptoms, health authorities have expanded anonymous testing since Dec. 14. A total of 1,252 infections, including 111 cases in the past 24 hours, has been confirmed through such testing so far, the KDCA said. 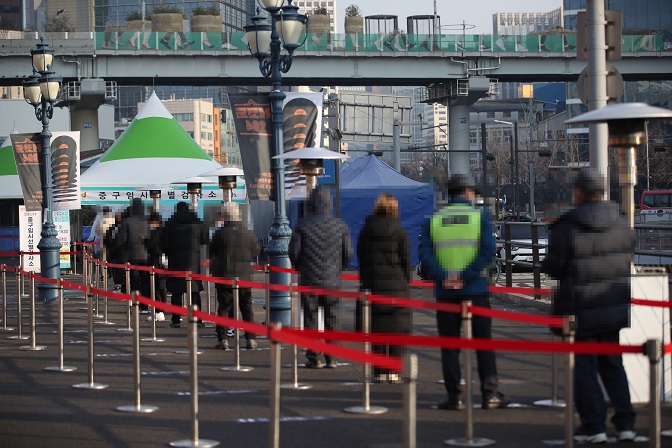 People line up to take COVID-19 tests at a temporary screening center outside Seoul Station in central Seoul on Dec. 27, 2020. The Korea Disease Control and Prevention Agency reported 970 new COVID-19 cases on the day, putting the total caseload at 56,872. (Yonhap)

Of the newly identified local infections, 359 cases were reported in Seoul and 237 cases in Gyeonggi Province that surrounds the capital. Incheon, west of Seoul, reported 60 more cases.

South Korea had managed to bring two waves of virus infections under control since the pandemic began, but health authorities are struggling to contain the current wave because clusters continue to emerge in the densely populated capital area.

At the same time, clusters showed signs of growing across the nation.

A detention center in Seoul’s Songpa Ward reported eight additional patients, raising the caseload to 528, while a nursing home in Seoul’s Yangcheon Ward identified 27 more cases, with the total reaching 28.

Other major cluster infections included a nursing home in Goyang, north of Seoul, which added two more patients, raising the total to 86. A religious facility in Gwangju, 330 kilometers south of Seoul, has reported 33 patients.

South Korea temporarily halted all flights from Britain until Thursday due to concerns over a new variant of COVID-19, believed to spread faster, in London.

An elderly Korean man in his 80s, who recently returned from Britain, has posthumously tested positive for COVID-19, prompting authorities to look into whether he contracted the new variant. Two of his family members have also tested positive.

Health authorities said that test results on whether the virus is the new variant are expected to come out during the first week of January.

The number of seriously or critically ill COVID-19 patients reached 293, compared with 299 from the previous day.

The total number of people released from quarantine after making full recoveries stood at 39,040, up 508 from the previous day.

The country, meanwhile, added 24 imported cases, increasing the total to 5,297.
Eight cases came from Russia, followed by four from the United States and four from Indonesia.