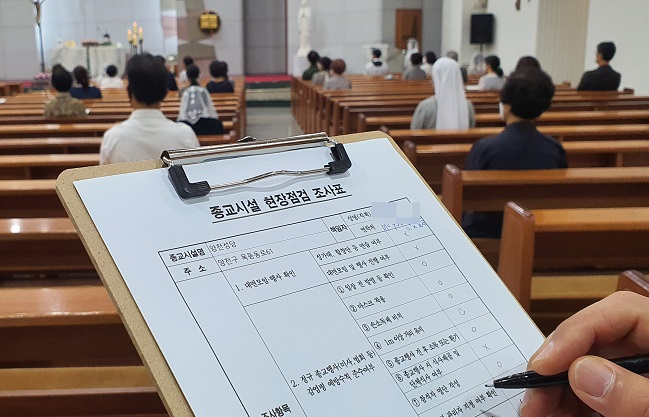 A Seoul city official checks how well quarantine measures are kept over the new coronavirus outbreak at a Catholic church in western Seoul on Sept. 13, 2020. (Yonhap)

The country decided not to further extend the Level 2.5 measures, set to end at midnight, in Seoul, Gyeonggi Province and Incheon but to lower the virus curbs to Level 2 instead, effective starting Monday, amid slowing virus cases.

The country added 121 more COVID-19 cases, including 99 local infections, raising the total caseload to 22,176, according to the Korea Disease Control and Prevention Agency (KDCA).

It marked a fall from 136 new cases reported Saturday. The number of local infections also declined below 100 for the first time in a month.

After the country kept new virus cases under 100 for months, it has seen daily infections grow by triple-digit figures since Aug. 14, due mainly to cases tied to a Protestant church and an anti-government rally in Seoul.

Since new virus cases soared to 441 on Aug. 27, they have recently slowed to the 100 range on the back of stricter social distancing guidelines. But daily infections are not on a markedly downward trend.

Health authorities said the current phase of the COVID-19 pandemic in the densely populated Seoul area is more serious than the first wave of the virus outbreak that gripped the southeastern city of Daegu in February and March.

Under the Level 2.5 scheme, eating at restaurants is only allowed until 9 p.m. Franchise coffee chains, bakeries and ice cream parlors are permitted to offer only takeout and delivery.

Starting Monday, the capital area will be placed under the Level 2 rules in the three-tier system.

Accordingly, the country is expected to lift business restrictions on facilities, including eateries, franchise coffee shops and cram schools.

Under the Level 2 scheme, outdoor gatherings of more than 100 people are banned. Sports events are allowed without spectators, and indoor meetings of 50 or more people are also prohibited. 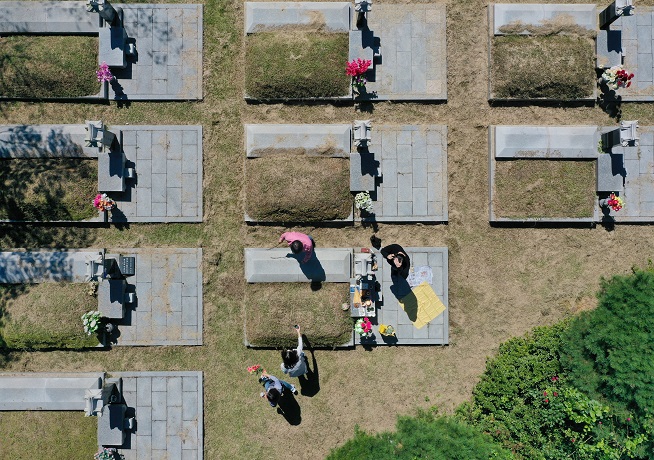 Members of a family pay their respects at an ancestral grave site in a memorial park in Incheon, west of Seoul, on Sept. 13, 2020, well ahead of the upcoming Chuseok fall harvest holiday. (Yonhap)

Health authorities are struggling to bring new virus cases below 100 amid concerns that infections may rebound after the upcoming Chuseok fall harvest holiday, set for early next month.

But the prolonged tough virus curbs have dealt a heavy blow to small merchants and the self-employed.

Of the newly identified local infections, 30 cases were reported in Seoul and 27 in Gyeonggi Province that surrounds the capital. Incheon, west of Seoul, reported three more cases.

Cases traced to Sarang Jeil Church in northern Seoul, a hotbed of the recent spike in new infections, stayed unchanged for a fifth day at 1,167 as of noon.

Cases tied to the anti-government rally in Seoul on Aug. 15 reached 577, up 12 from the previous day.

Sporadic cluster infections showed no signs of letup, with cases linked to a general hospital in western Seoul rising by six to 29. Infections tied to a mountain hiking club in the Seoul area increased by three to 38.

Over the past two weeks, the proportion of untraceable cases accounted for 23.9 percent of the total 2,477 cases, according to the KDCA.

The country, meanwhile, reported 22 imported cases, with seven cases coming from Uzbekistan and four from India. Total cases coming in from overseas reached 3,003.

The number of seriously or critically ill COVID-19 patients reached 157 as of midnight, down seven from the previous day.

The total number of people released from quarantine after making full recoveries stood at 18,226, up 197 from the previous day.