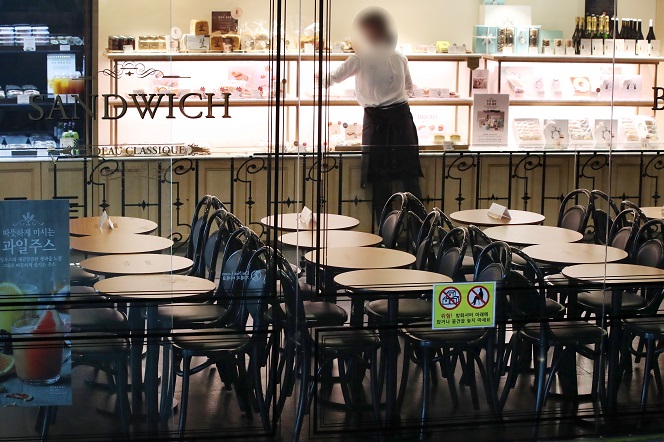 This photo, taken Sept. 7, 2020, shows an empty franchise bakery in Seoul as the government has limited franchise coffee chains, bakeries and ice cream shops to offering takeout and delivery over the COVID-19 outbreak. (Yonhap)

SEOUL, Sept. 13 (Korea Bizwire) — South Korea will relax business restrictions on eateries, franchise coffee chains and other facilities in the wider Seoul area, as the country decided Sunday to ease tougher anti-virus curbs in the region for the next two weeks.

The country decided not to extend the so-called Level 2.5 social distancing scheme, set to end at midnight, in the densely populated capital area, as the stricter curbs have been effective in slowing new virus cases, according to health authorities.

Starting Monday, the Seoul metropolitan area will be placed back under the Level 2 rules in the three-tier system, on a par with the nationwide alert level, until Sept. 27.

“While relaxing the social distancing guidelines, the government will apply strict and targeted quarantine steps at high-risk facilities,” Health Minister Park Neunghoo said in a briefing.

“Thanks to our concerted efforts, the spread of COVID-19 has been constantly decreasing in the greater Seoul area,” he said. “But we are still in a critical situation. The downward pace is slower than expected, compared to that of the first wave in spring.”

Since late last month, the country has imposed the enhanced social distancing scheme in Seoul, Gyeonggi Province and Incheon, home to half of the country’s 51.6 million population.

Under the Level 2.5 scheme, eating at restaurants is only allowed until 9 p.m. Franchise coffee chains, bakeries and ice cream parlors are permitted to offer only takeout and delivery.

Starting Monday, those facilities will be permitted to operate normally, but under the condition that they will strictly manage entry logs of customers and keep other sanitary measures.

Franchise coffee shops and bakeries can allow customers to eat or drink inside the outlets, but they should limit the number of such people.

A ban on operations will be lifted for midsize cram schools and indoor sports facilities under the strict quarantine steps. 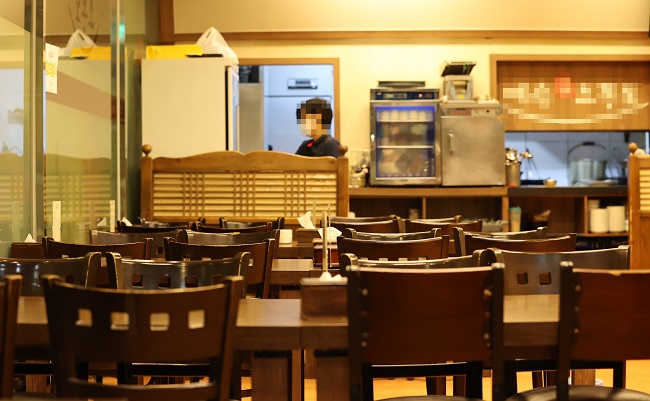 This file photo, taken Sept. 1, 2020, shows a restaurant in central Seoul where almost no customers were found during lunch time. (Yonhap)

Internet cafes will be allowed to reopen across the nation. But they should ban the entry of teenagers and eating food inside the cafes and ensure that customers sit at a distance from one another.

Under the Level 2 scheme, South Koreans are allowed to maintain most of their daily routines, but outdoor gatherings of more than 100 people are banned. Sports events are allowed without spectators, and indoor meetings of 50 or more people are also prohibited.

“High-risk” facilities, including karaoke rooms, clubs and buffets, should continue to shut down under the rules.

Owners of franchise cafes and mom-and-pop stores welcomed the downgrade and rolled up their sleeves to bring back tables and chairs to their premises to receive customers starting Monday.

“We fully welcome the government’s announcement,” said an official from the Korea Foodservice Industry Association. “We will comply with the government’s requirements, and we ask customers to follow sanitary and distancing guidelines as well.”

After the country kept new virus cases under 100 for months, it has seen daily infections grow by triple-digit figures since Aug. 14 due mainly to cases tied to a church and a political rally.

New COVID-19 cases fell below 200 for the 11th straight day Sunday on the back of stricter social distancing guidelines. But daily infections are not on a markedly downward trend.

Despite concerns about sporadic cluster infections and untraceable cases, health authorities decided to scale down the level of social distancing, apparently taking into account economic pains faced by smaller merchants and the self-employed.

“We took into consideration the social fatigue, as well as the results of the strict disease prevention measures,” Prime Minister Chung Sye-kyun said at a pan-government meeting on COVID-19 response. 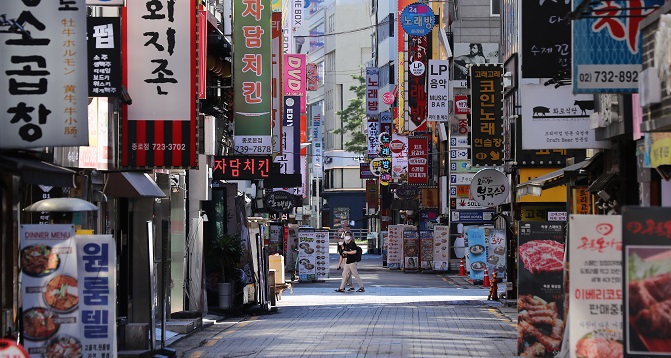 The government said it will set the two weeks starting Sept. 28 as a special period for strong nationwide anti-virus efforts since early October is expected to be “the biggest challenge” against the efforts in the second half of the year.

The period includes the extended five-day Chuseok fall harvest holiday and the Oct. 9 Hangeul Day, a national holiday for commemorating the proclamation of the Korean alphabet by King Sejong of the Joseon Dynasty in 1446.

“We will impose tighter distancing guidelines during the Chuseok holiday,” the government said. “It is a precautionary measure against possible mass infections caused by increased mobility.”

It said the two-week special period is also aimed at bringing the number of infections under control before the winter season starts.

On Sept. 4, the country also extended the current Level 2 measures imposed across the nation under a three-tier social distancing scheme for another two weeks until Sept. 20.

The government raised the antivirus curbs to Level 2 in the greater Seoul area on Aug. 16 and expanded them across the nation a week later.

The government has been cautious about raising antivirus steps to Level 3 as doing so has far-reaching social and economic impacts.