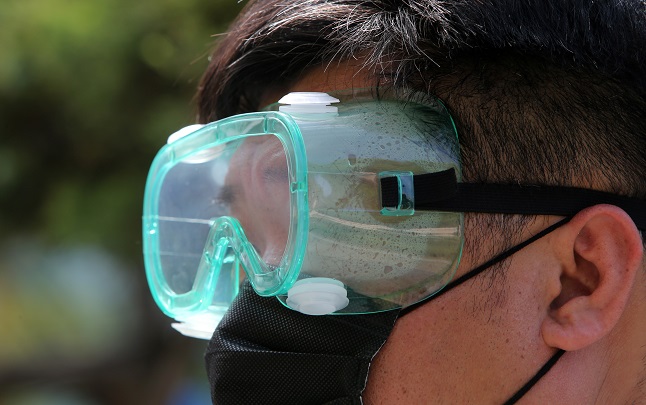 An official at the test venue of an exam for public servants in Chuncheon, east of Seoul, sweats in the summer heat on June 13, 2020. (Yonhap)

The country added 49 new cases, including 44 local infections, raising the total caseload to 12,051, according to the Korea Centers for Disease Control and Prevention (KCDC).

Of the locally transmitted cases, all but one came from Seoul and surrounding areas.

One of the newly added cases reported a day earlier later retested negative.

While new virus cases have been plateauing in other areas, the metropolitan area that is home to half the country’s population of 50 million has been suffering from a string of cluster infections tied to religious gatherings, a distribution center and sports facilities.

Late last month, the country implemented two weeks of tougher virus prevention guidelines for the metropolitan area, with measures including shutting down public facilities and regulating bars and karaoke rooms.

Earlier this week, however, South Korea decided to indefinitely extend the deadline previously set for Sunday, as nearly all locally transmitted cases have been reported in the metropolitan area this month.

The measure will be in place until the number of new cases falls back to a single digit, according to health authorities.

QR code-based entry logs for all visitors will also be mandatory for cram schools and PC rooms in the area, in addition to entertainment facilities.

Health authorities also warned that the country may roll back to strict social distancing nationwide again unless the virus curve flattens sharply.

South Korea had eased its strict nationwide social distancing guidelines on May 6 as the daily new COVID-19 cases reached single digits, with phased reopenings of schools starting in mid-May.

The country completed phased school reopenings this week, although some regulations, like a mix of online and offline classes, are still in force.

On Saturday, cases linked to small churches in the metropolitan area rose by five to reach 100.

Cases tied to a door-to-door business establishment reached 153 on Saturday, up 14 from a day earlier. A whopping 56 percent of the related patients were aged 60 and above.

COVID-19 cases traced to a table tennis gym in southwestern Seoul came in at 62, up one from a day earlier. 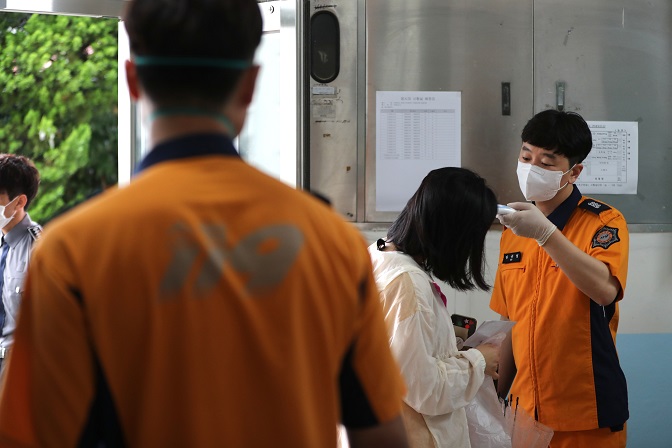 Test takers have their body temperatures checked before entering the venue of an exam for public servants in the southern port city of Busan on June 13, 2020. (Yonhap)

Other smaller cluster infections were reported across the nation as well.

A total of 16 cases traced to a day care center for seniors in western Seoul has been reported so far.

South Korea is carrying out investigations on a handful of other smaller group infections in greater Seoul, including a language institution and a gym.

“Cluster infections among younger people from clubs and bars in May have spread to religious and sports facilities and eventually to day care centers for seniors, which can potentially lead to more deaths,” KCDC Deputy Director Kwon Joon-wook said in a briefing.

Health authorities remain vigilant over asymptomatic “silent” virus spreaders as well. About 30 percent of COVID-19 patients here are asymptomatic, according to the KCDC.

The number of imported cases advanced by five to reach 1,330, with around 86 percent of them being South Korean nationals.

The overall fatality rate reached 2.3 percent, although the figure reached 25.6 percent for those aged 80 and above. South Korea has not yet reported a death from a patient aged below 30.

The total number of people released from quarantine after full recoveries stood at 10,691, up 22 from the previous day, indicating nearly 89 percent of South Korean COVID-19 patients have been cured.

The country has carried out 1,094,704 COVID-19 tests since Jan. 3. The figure translates to roughly 1 out of every 50 South Koreans receiving COVID-19 tests.