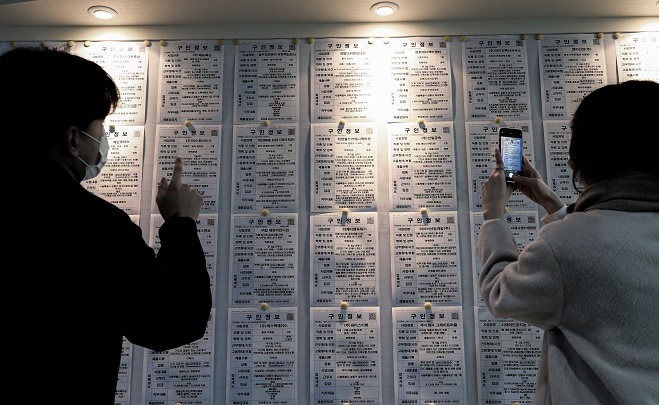 To many, the job market seems to be a deep and dark tunnel with no light in sight.

In particular, with the job market for those in their 20s, which is the first step into society after graduation from college, but also for those in their 30s and 40s, who form the backbone of the national economy, showing signs of collapse, concerns are mounting about the collapse of their living base, the erosion of the consumption base and a decline in economic vitality.

The January employment report released on Wednesday by Statistics Korea was the worst on record since the financial crisis more than 20 years ago.

The number of jobs declined across all age groups. Nonetheless, the decline in the number of jobs for those in their 20s, 30s and 40s who are supposed to be more vigorous than others in both production and consumption activities, is particularly painful.

“If those in their 30s and 40s lose their jobs, it instantly leads to economic hardship for their entire families,” said Cho Young-moo, a researcher at LG Economic Research Institute.

“Given that they are the age group with the highest consumption propensity, domestic demand will inevitably drop.”

The government plans to provide more than 900,000 jobs in the first quarter of this year while expanding the number of first-half hires by public institutions.

Many experts have pointed out that such a plan is not a fundamental solution but a temporary expedient, adding that good jobs should be created by private companies.

They stressed that the government’s efforts to improve regulations to bring more vigor to business activities have much ground to cover.