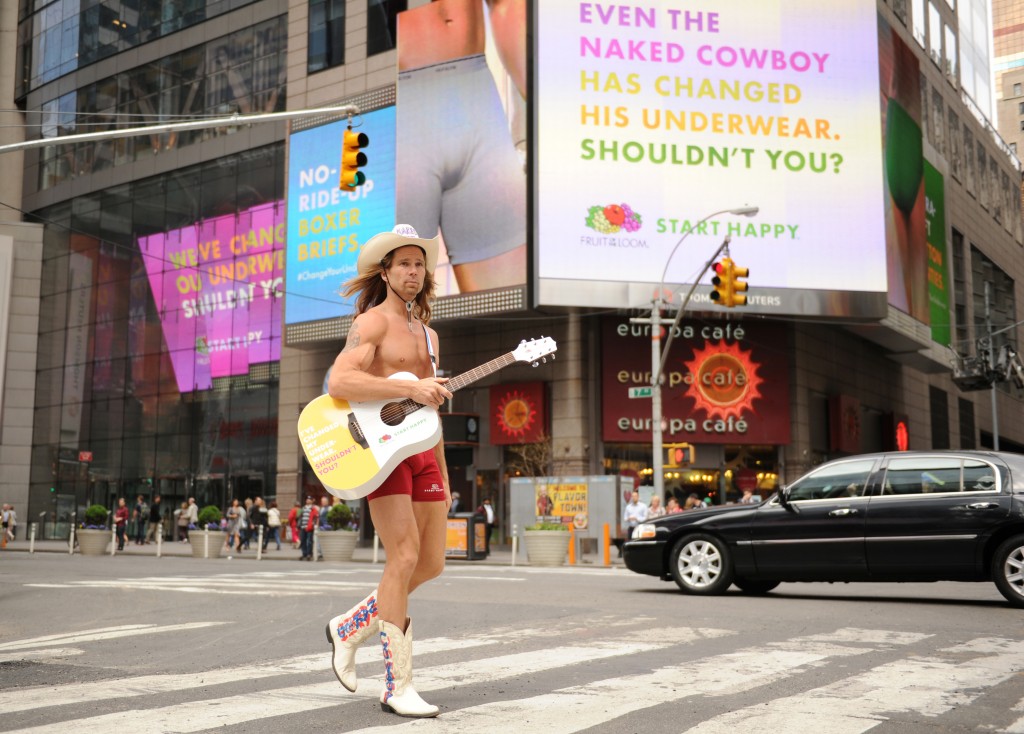 BOWLING GREEN, Ky., May 6 (Korea Bizwire) – Fruit of the Loom announced on May 6th that famed American street performer The Naked Cowboy® is officially changing his iconic underwear from  standard briefs to Fruit of the Loom’s all-new Reinvented Boxer Brief.

The New York City icon will be rocking his boxer brief look – with  all-new features such as the “no-ride-up leg” – today, May 6, in his  outpost at Times Square while treating fans to free samples of Fruit of  the Loom® underwear.

Fruit of the Loom’s Reinvented Boxer Briefs come as a welcome upgrade  for boxer-brief wearing guys everywhere. According to research conducted  by the brand1, leg ride-up is the number one complaint among  boxer brief wearers.

To answer consumer demands and in accordance with  the Fruit of the Loom’s brand promise of the relentless pursuit of  better, the boxer brief has been reshaped to better contour to the leg,  prevent ride-up and stay in place all day long. The Naked Cowboy, who is  famous for rocking out for fans while wearing only white briefs, will  bring the new features of Fruit of the Loom’s Reinvented Boxer Briefs to  life during today’s appearance in Times Square, and will even perform an  all-new, custom song devoted to his new underwear look.

“At Fruit of the Loom, we pride ourselves on creating products that  solve consumer needs. Men expressed their need for a boxer brief with  legs that didn’t ride up, so we made it our mission to create a product  that solved for that need,” said Scott Greene, Sr. Vice President of  Brand Management for Fruit of the Loom.

“With the updated Boxer Brief,  men can start their day happy and confident knowing their underwear will  stay in place all day long. And who better than The Naked Cowboy – a man  who relies on good underwear throughout his day – to be among the first  to officially make the switch!”

The launch of the updated Boxer Briefs is one of the first new product  releases under the Fruit of the Loom® Start Happy™ advertising platform,  which debuted in October and celebrates the power of positive underwear.

“When performing on the streets of New York wearing only my underwear,  it’s important I feel confident. The fit and shape of the underwear is  critical – they have to be just right,” said The Naked Cowboy. “I’m  thrilled Fruit of the Loom has conquered the ‘no-leg-ride-up’ issue,  which allows me to focus on what’s really important – entertaining the  people of New York City!”

On May 6, right in the heart of The Naked Cowboy’s  home, the NASDAQ tower will also feature real-time images of consumers  posing with The Naked Cowboy in front of colorful undie cut-outs of the  new men’s boxer brief and ladies’ cotton panty products.

About Fruit of the Loom

Fruit of the Loom knows the power of positive underwear. That’s why  we’ve been helping families pull on a daily pick-me-up for over 160  years. We make colorful, smile-inducing, clothes with fits that won’t  quit. And we’re wallet-friendly too. From hipsters to hoodies, boxers to  bras, and sleepwear to socks, our clothes are made so you can grab the  world by the waistband and start your day happy. For more information on  Fruit of the Loom, visit www.fruit.com.

Source: Fruit of the Loom (via BusinessWire)