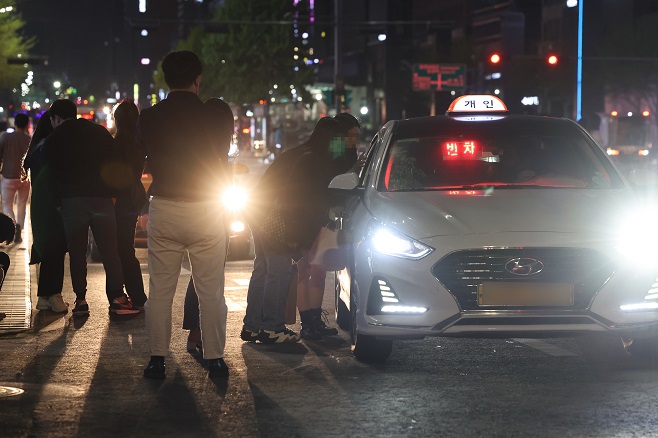 People try to get a taxi in the busy Gangnam district in southern Seoul on April 19, 2022. (Yonhap)

SEOUL, April 29 (Korea Bizwire) — Around midnight on Tuesday, Park Ji-young, a 30-year-old office worker, was exasperated after wasting nearly an hour trying to get a taxi from the central Seoul business district of Gwanghwamun to her home in Dangsan, a neighborhood not far away.

She tried every option — tapping into all kinds of taxi-hailing apps, jostling with competitors to flag down a taxi and moving from block to block for a better chance — all to no avail.

She gave up and stepped onto a nighttime bus, eventually taking 1 1/2 hours to arrive home, a route that usually takes less than 20 minutes by taxi.

“It wasn’t even a Friday night. I didn’t expect getting a taxi on a weekday night to be that hard. I almost cried,” she told Yonhap News Agency. 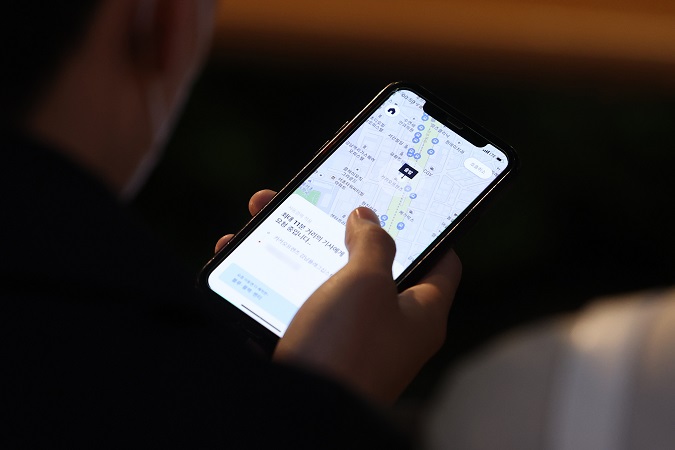 A person tries to call a taxi on a smartphone application in the busy district of Gangnam in southern Seoul on April 19, 2022. (Yonhap)

Park is not alone in finding it almost impossible these days to catch a cab in the capital at night.

With nearly all COVID-19 social distancing rules lifted this month, Seoul has seen an outburst in late-night company dinners, private gatherings and drinking parties. Naturally, the increased activity has fueled an upsurge in demand for taxi rides home.

Despite the high demand, the taxi industry dramatically dwindled under the country’s strict social distancing regimes of the past two years, which prohibited cafes, restaurants and bars from nighttime operations while many office employees worked from home.

Amid worsening profitability stemming from a pandemic-driven plunge in demand, coupled with rising gas prices, many taxi drivers, especially those focusing on nighttime services, left the industry in search of better job opportunities.

According to the Seoul city government, a total of 69,362 taxi rides were reported in the capital in the two hours following midnight on April 18, the first night since all major COVID-19 social distancing rules was abolished, including a business hour curfew on cafes and restaurants and a cap on the size of private gatherings.

It marked a surge of 96.2 percent in taxi use from the average of 35,346 rides reported in the corresponding time in the second and third weeks of February.

During the same period, however, the average number of taxis in service per hour grew only by 62.8 percent to 16,860. 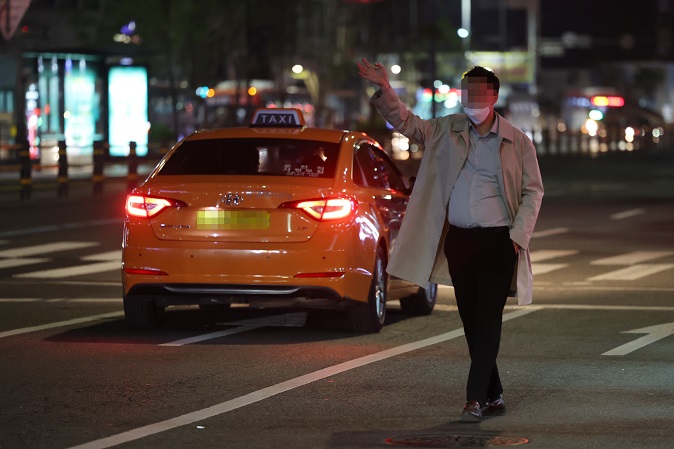 A people tries to flag down a taxi in the busy district of Gangnam in southern Seoul on April 19, 2022. (Yonhap)

As complaints about the late-night taxi shortage flooded in, the city government stepped in and announced a series of measures last week.

The city will temporarily lift operating day restrictions on privately-owned taxis, which require them to take every third day off. The temporary relaxation allows taxi owner-drivers to run services from 9 p.m. to 4 a.m. on otherwise off days.

The operating hours of taxis dedicated to nocturnal services will be expanded by two hours while taxi firms will be advised to provide more nighttime services. City officials expect an average of some 7,100 more cabs to hit the road every day for nighttime services.

The city is also reviewing an option to lengthen the current midnight-to-4 a.m. window where the 20-percent surcharge applies to 10 p.m. to 4 a.m. in a bid to encourage more taxi drivers to work late.

Cab drivers are not satisfied.

They say that behind the taxi shortage is the current taxi operation system that keeps their income at chronically low levels as well as the growing dominance of taxi-hailing apps accused of taking high commission fees.

“Few taxi drivers would want to work at night when the work is physically more demanding while the income is barely bigger than working in daytime,” a cab driver anonymously wrote online, protesting the city’s fixed taxi fares of 3,800 won (US$3) for the first 2 kilometers in daytime and 4,600 won at night are “too cheap.”