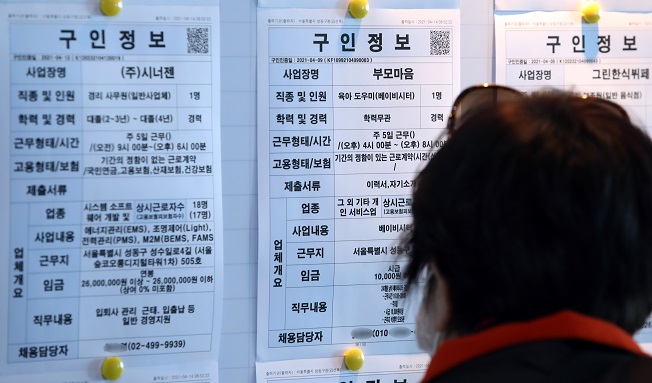 This photo, taken on April 14, 2021, shows a citizen looking for job info at a state job arrangement center in Seoul. (Yonhap)

SEOUL, April 21 (Korea Bizwire) — The number of employees in the food service segment declined by the most in the May-October period of last year due to the fallout of the pandemic, data showed Wednesday.

The number of people employed at restaurants and eateries reached 1.54 million in the cited period, 179,000 fewer than the previous year, according to Statistics Korea.

It marked the largest on-year decline since 2013, when the statistics agency began compiling related data.

Workers in the food service segment accounted for the largest share of 5.7 percent of a total of 27.1 million people hired in the six-month period of last year.

The number of people working at private education institutions declined by 48,000 on-year to 340,000, the data showed.

The face-to-face service segments, such as hospitality and retailers, were hit hard by the COVID-19 pandemic as people refrained from visiting offline stores on concerns about virus infections.

After reporting job losses for the 12th straight month, the country saw the number of employees increase for the first time in 13 months in March amid an economic recovery.