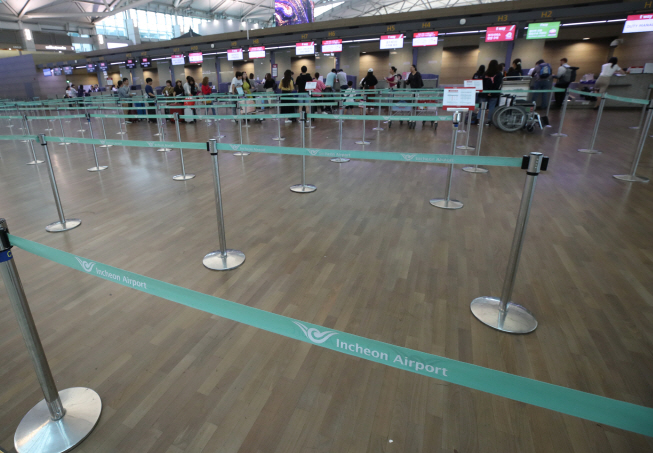 A relatively small number of travelers checking in for flights to Japan at Incheon International Airport, west of Seoul on Sept. 4, 2019. (Yonhap)

SEOUL, Sept. 16 (Korea Bizwire) — The number of South Koreans who travelled to Japan during this year’s fall harvest holiday sharply declined from last year, due to the response to Tokyo’s export curbs on Seoul, data showed Monday.

The number of Koreans who traveled to or from Japan via Incheon International Airport came to a daily average of 25,230 during the Chuseok holiday, down 29.1 percent from last year’s holiday, according to the operator of the airport, west of Seoul.

The tally was calculated from Wednesday to Sunday, which includes the three-day Lunar holiday that started Thursday. Last year’s holiday fell in late September.

The number of Korean travelers departing for Japan reached a daily average of 12,140, down 39.1 percent from last year’s Chuseok holiday, the data showed, while those who returned home from Japan dipped 16.3 percent.

The total number of people who went on overseas travels also dipped 4.1 percent on-year to an average of 179,000 per day, affected by the fall in travelers to Japan.

“The total result was attributable to the fall in users of flights to Japan. Demand for overseas travel also appeared to fall as this year’s holiday was relatively short,” the Incheon International Airport Corp. said.

Many South Koreans have been taking part in a voluntary campaign not to travel to Japan in a protest against Tokyo’s exports restrictions to South Korea of key high-tech materials.

But despite frosty ties between Seoul and Tokyo, the number of Japanese people travelling to South Korea increased in the June-August period, compared with a year earlier, the Justice Ministry said.

The number of Japanese entering Korea rose 13.6 percent on-year to 896,000 in the cited period, the ministry said.

But the on-year monthly growth has slowed since June when the tally rose 20 percent. In August, it gained 4.8 percent from a year earlier, after increasing 19.2 percent in July.