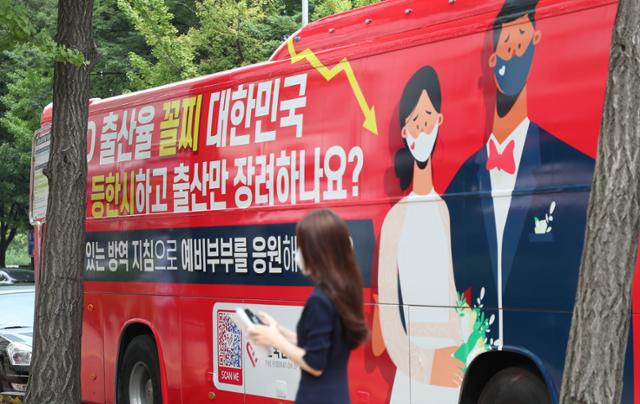 The Youth Married Couple Association stages a protest on Aug. 30, 2021, calling on the government to revise quarantine rules on wedding ceremonies amid the COVID-19 pandemic. (Yonhap)

Some 44.5 percent of the country’s 1.18 million couples, who were legally married in the five years up to November 2020, did not have children, up from 42.5 percent a year earlier, according to the data from Statistics Korea.

The newlyweds include first-time and other newly married couples residing in the country.

South Korea has been struggling with a decline in childbirths as many young people delay marriage or give up on getting married or having babies amid economic difficulties and changing social norms.

The country’s total fertility rate — the average number of children a woman bears in her lifetime — hit a record low of 0.84 last year, much lower than the replacement level of 2.1 that would keep South Korea’s population stable at 52 million.

It marked the third straight year that the total fertility rate was below one.

Home ownership affected childbirths, the data showed. Newlyweds who have their own homes had an average of 0.76 newborn, higher than 0.62 for newly married couples without a home.

It appears to have been related to the country’s drastic rise in housing prices over the past couple of years.

The newlyweds earned a yearly average income of 59.89 million won in 2019, up 4.9 percent from a year earlier, and 52 percent of the total were dual-income households, according to the data.

The number of new marriages declined by 6.1 percent on-year in 2020 amid the COVID-19 pandemic, the data showed.