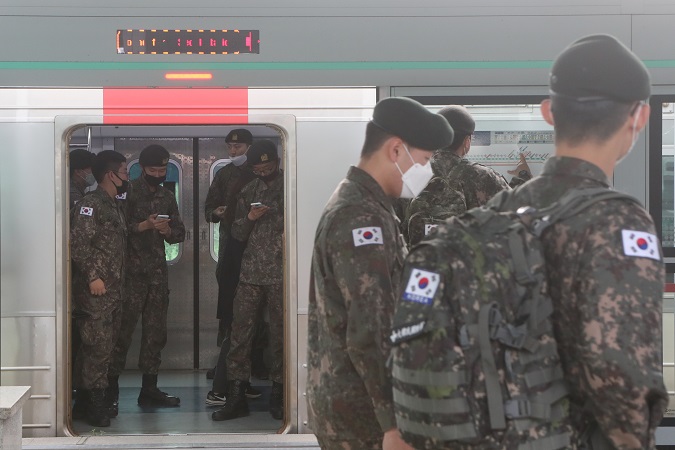 In this file photo, taken on May 8, 2020, soldiers board a train at a station in Paju, north of Seoul. (Yonhap)

SEOUL, Aug. 21 (Korea Bizwire) — Postgraduate students serving as ‘technical research personnel’ instead of joining the military will lose their military duty exemption if they fail to obtain a doctorate degree during their service period, the defense ministry said Thursday.

The Ministry of Defense issued advance notice for the revision of the legislation containing this new measure.

The technical research personnel system for postgraduate students was introduced to enable those with a master’s degree in science and engineering to work in the R&D departments of private or government funded research institutes for three years instead of serving in the active military duty.

Thus far, postgraduates serving the alternative military duty have been acknowledged as having had completed their military service even if they fail to get PhD. This practice, however, stirred up controversy over whether it is a privilege or not.

Considering that it takes about five years on average to get PhD, the ministry decided to give a three-year grace period to those who fail to get a PhD during the two-year alternative military duty period.

If technical research personnel fail to obtain a PhD during the five-year period, they will lose their military duty exemption and have to serve in the active duty military.

In other words, postgraduate students serving as technical research personnel can be acknowledged as having completed their military service only if they obtain a PhD within the five-year period.