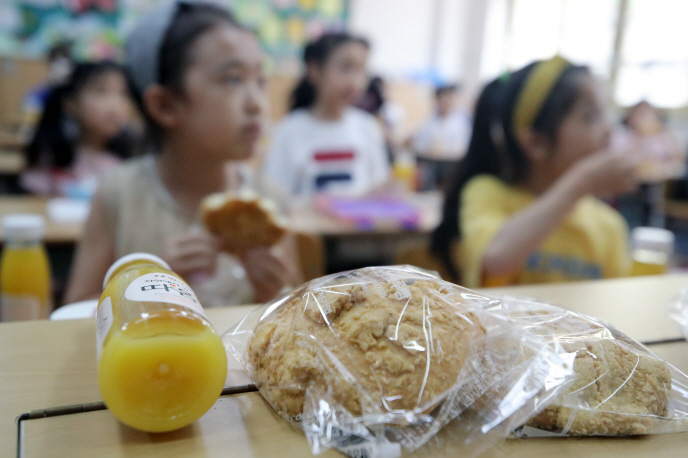 Bread and beverages are distributed to students at an elementary school in Busan, 450 kilometers southeast of Seoul, at lunchtime on July 3, 2019. (Yonhap)

SEOUL, Jul. 3 (Korea Bizwire) — Non-regular workers in the public sector staged a general strike nationwide on Wednesday under the orchestration of the Korean Confederation of Trade Unions (KCTU), a militant labor umbrella group.

About 26,000 of some 200,000 non-regular public employees affiliated with the KCTU took part in the strike scheduled to continue through Friday, calling for wage hikes, abolition of discrimination and the switching of their status to that of regular workers, according to the Ministry of Employment and Labor.

The ministry said non-regular workers at elementary and secondary schools nationwide, including cafeteria cooks and administrative assistants, accounted for 22,000 of the strike participants, with the rest belonging to central administrative organs, local autonomous governments and public institutions.

An alliance of non-regular school workers with 95,000 members had threatened that at least 50,000 workers will walk out to ask for a basic pay hike of 6.24 percent and eliminating discrimination in the payment of various allowances.

But the education authorities have proposed a pay increase of 1.8 percent for them.

According to the Ministry of Education, 4,601, or 44.1 percent, of the nation’s 10,426 elementary and secondary schools suspended the provision of school lunches on the first day of the three-day walkout.

Students at most of the strike-hit schools were offered substitute foods, like bread and milk, for lunch.

Many of the strike-hit schools reduced their school hours to cope with the walkout by cafeteria workers and administrative assistants.

In case of after-school day care services, teachers and regular school employees were mobilized to substitute for strike participants. 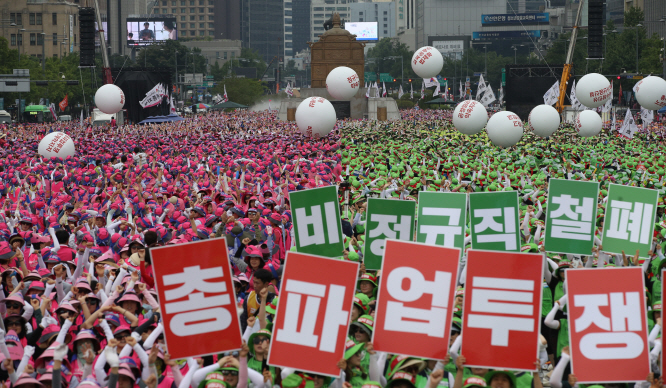 Non-regular public employees hold a rally at Gwanghwamun Square in Seoul on July 3, 2019, after launching a three-day nationwide strike. (Yonhap)

About 32,000 non-regular public employees and other KCTU members held a massive rally at Gwanghwamun Square in central Seoul on Wednesday afternoon to protest the Moon Jae-in government’s labor policies, according to police.

The KCTU claimed the number of participants in the Gwanghwamun rally exceeded 50,000, saying similar protest rallies are planned in provincial cities on Thursday and Friday.

The KCTU, whose nearly 1 million members make it one of the nation’s largest labor groups, has been intensifying pressure on the Moon government to implement its election pledge to narrow the gap between regular and non-regular workers and switch all non-regular workers in the public sector to regular status.

The labor umbrella group, unhappy with the slowing pace of status switches for non-regular employees under the Moon administration, will again call for a general strike on July 18.

Prime Minister Lee Nak-yon vowed to take all necessary measures to minimize public damage from the strike during a meeting of top government and ruling party policymakers on Wednesday morning.

“The people are gravely concerned about the general strike (by non-regular public employees). The government understands well the pain and misery of the workers and will do its best to resolve the problems,” Lee said.