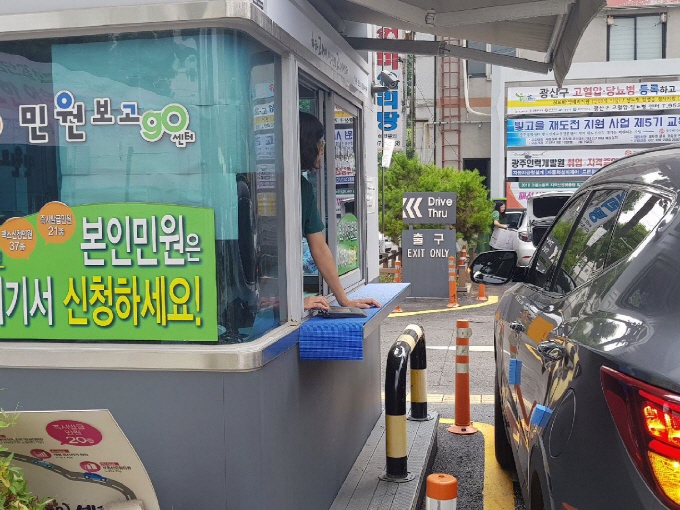 (image: Ministry of the Interior and Safety)

SEOUL, Aug. 8 (Korea Bizwire) — A new administrative service that issues official civil documents for citizens, allowing them to “drive through”, is garnering attention.

The Ministry of the Interior and Safety introduced yesterday the drive-through civil center currently under operation in Gwangju’s Cheomdan 2-dong district office in Gwangsan-gu as an example of innovation in local government administrative practices.

People who visit the center can be issued 58 types of government documents without having to leave their car.

As much as 27 minutes can be shaved off from a user’s waiting time, not including time spent finding parking, explained the ministry.

Since it opened its doors in December 2015, the center has issued 16 percent of the requested documents via its drive-through counter.

Last year, the center was awarded a prize for setting a leading example of improving the civil administrative system.

Meanwhile, the city of Gwangju is currently operating a school zone that follows the “Gwangju-standard model,” another newly developed government system that is being lauded for its innovative approach.

The model comprises a 3-in-1 installation of yellow traffic lights, a cross walk with speed bumps, and a light-emitting road sign.

The installation helps drivers identify the school zone more easily, which has led to fewer traffic accidents within the area.

The city of Gwangju will be adding the installations to six primary schools in the latter half of the year, after the two previously installed models were well received by parents.

Vice Minister of the Interior and Safety Shim Bo-kyun is expected to visit the drive-through civil center today to try out the service before heading to Pungam Primary School, the site of the school zone installations.

Shim said that the government will work hard to ensure that innovations continue to come from the participation of the community and civil servants in charge.