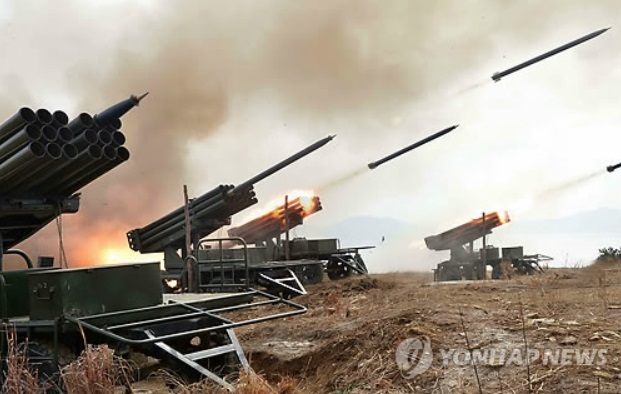 The call came as Seoul and Washington plan to conduct their annual joint military drills in March, which have been denounced by Pyongyang as rehearsals for an invasion of the North. (image courtesy of Yonhap)

Kim has toured the recently opened the guard unit hall at the Victorious Fatherland Liberation War Museum, which contains records of the 1950-53 Korean War and hosts a statue of the country’s founder and Kim’s grandfather, Kim Il-sung, according to the official Korean Central News Agency (KCNA). It did not specify when Kim visited the hall.

“The prevailing situation where a great war for national reunification is at hand requires all the Korean People’s Army (KPA) units to become guard units fully prepared for war politically and ideologically, in military technique and materially,” Kim was quoted as saying by the KCNA.

Kim has urged the military to strive to earn the title of guard unit to crush the U.S. and its allies in the future war, it added. The title of guard, the highest given to elite units, was created in July 1950 during the war.

The call came as Seoul and Washington plan to conduct their annual joint military drills in March, which have been denounced by Pyongyang as rehearsals for an invasion of the North.

Pyongyang offered on Jan. 10 to temporarily halt nuclear tests if the U.S. suspends its annual military exercises with South Korea this year, a proposal flatly rejected by Seoul and Washington.

On the visit to the museum, Kim was accompanied by Hwang Pyong-so, director of the general political bureau of the KPA, Choe Ryong-hae, the Workers’ Party of Korea secretary and others, the KCNA said.

It marked the first time since October that Hwang was mentioned ahead of Choe, hinting that Hwang’s ranking has returned to being higher than Choe’s, making him once again the second-most powerful man in the communist regime.

The move is seen as reinforcing speculation that Hwang may have been named a member of the Politburo Presidium of the KPA, analysts said. Choe is also a member of the military’s presidium.

North Korea held a series of meetings this month to deal with its personnel reshuffle during which analysts said the composition of the KPA’s political bureau might have been changed.

In May last year, the North’s leader Kim named Hwang the military’s top political officer, making him the de facto No. 2 man by replacing Choe.

But Choe seemed to be restored to the No. 2 post after being called a member of the politburo presidium in late October, less than one month after making a surprise visit to South Korea to attend the closing ceremony of the Incheon Asian Games on Oct. 4 with Hwang.