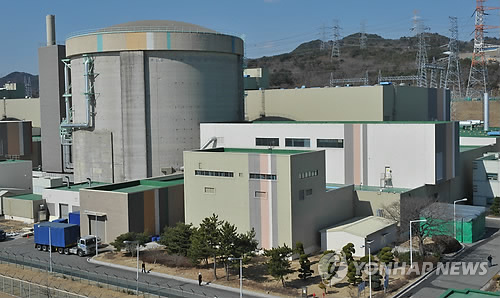 The Wolsong-1 is the first heavy-water reactor to receive a life span extension. (image: Yonhap)

SEOUL, Feb. 27 (Korea Bizwire) — South Korea’s nuclear watchdog voted early Friday to extend the operation of a 32-year-old nuclear reactor to 2022 despite strong opposition from residents and environmental groups over its safety.

The approval cleared the way for the 678-megawatt Wolsong-1 reactor on South Korea’s southeast coast to go back on line after it was turned off in November 2012, following 30 years of commercial operation.

The Nuclear Safety and Security Commission (NSSC) made the decision after a marathon meeting marred by intense haggling between the opposing sides. Seven government-appointed members of the commission voted in favor of an extension while the two other members boycotted the vote in protest.

In October, the state-run Korea Institute of Nuclear Safety completed an inspection of South Korea’s second-oldest reactor and concluded it can be operated for another 10 years. However, the NSSC had delayed its decision on mounting questions over the reactor’s safety, especially after Japan’s Fukushima disaster in 2011.

The state power operator, Korea Hydro and Nuclear Power Co. (KHNP), welcomed the decision and vowed thorough safety inspections to put the reactor back into operation around April.

“Considering the current energy situation, efforts needed for building a new nuclear reactor, as well as related construction and environmental costs, (South Korea) needs to utilize current atomic facilities as much as possible,” the KHNP said. “We will do our best to ease public safety concerns.”

In contrast, residents in Gyeongju, a city 371 kilometers southeast of Seoul that hosts the reactor, and environmental groups strongly opposed the decision.

“We are very disappointed about the NSSC’s unilateral decision that ignored opinions of local residents,” said Lee Sang-hong, an official of the Korean Federation of Environmental Movement’s Gyeongju branch. “We expect stronger opposition from the residents as they have lost their trust in the commission. We will soon be preparing future countermeasures.”

According to a recent survey of 1,000 adults, 60.8 percent said the Wolsong-1 should be shut down for safety reasons. Of the remainder, 30.4 said the reactor could be restarted if it passes safety tests.

The continued operation of the heavy-water reactor is expected to affect reviews of the nation’s other reactors nearing retirement.

In 2007, the government extended by 10 years the life span of the 580-megawatt Gori No. 1 light-water reactor that began commercial operations in 1977. The Wolsong-1 is the first heavy-water reactor to receive a life span extension.

South Korea has 23 nuclear reactors in operation, from which it currently gets about 30 percent of its electricity supply, and is building several more.