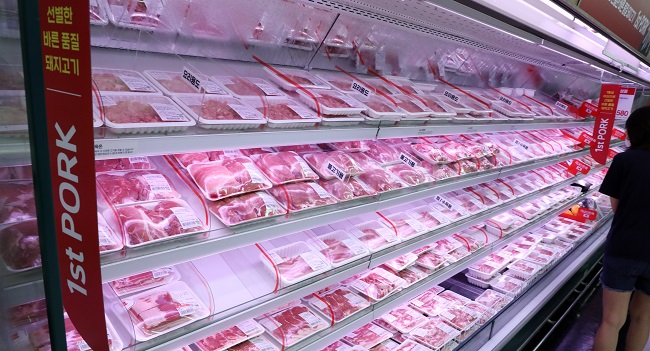 This undated file photo shows beef on display at a large discount store in Seoul. (Yonhap)

There were 3.33 million beef cattle, including Korean-bread cattle known as “hanwoo,” in the country as of June 1, up 2.7 percent from a year earlier, according to the data by Statistics Korea.

It marks the largest-ever tally since the statistical agency began tracking related data in 1986.

The second-quarter increase was attributed to a steady rise in beef prices that prompted more farmers to grow beef cattle.

The data also showed the number of milk cows in the country gaining 1.3 percent on-year to 406,000 head in the April-June period.

In contrast, the number of pigs fell 2 percent on-year to 11.09 million in the second quarter, hit by outbreaks of African swine fever during the third and fourth quarters of last year.