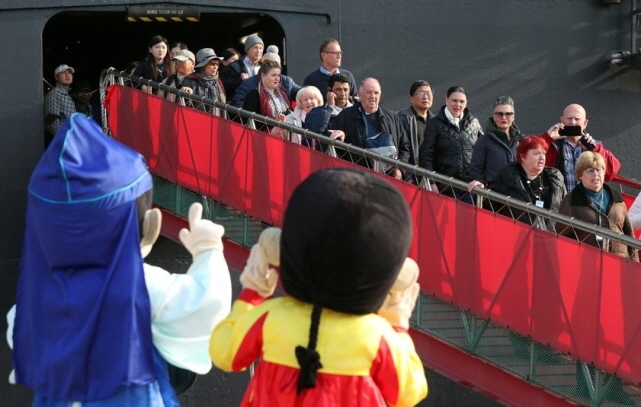 Cruise tourists arriving at a port in South Korea. (Yonhap)

SEOUL, Dec. 23 (Korea Bizwire) — The number of foreign cruise tourists visiting South Korea switched to an upturn this year for the first time in three years, mainly on the back of more arrivals from Japan and Taiwan, industry data showed Monday.

Some 249,000 foreigners arrived in the country on cruise ships over the January-October period, compared with 202,000 tallied for the whole year of 2018, according to the Ministry of Oceans and Fisheries.

After peaking at 1.05 million in 2014, the number sank to 394,000 in 2017 following the diplomatic standoff between Seoul and Beijing over the deployment of a U.S. missile shield system, known as Terminal High Altitude Area Defense (THAAD) battery, in South Korea.

The Korean government has made efforts to strengthen its overseas marketing in Asian countries other than China to convince more cruise visitors to visit South Korea and invite more cruise liners to enter the country.