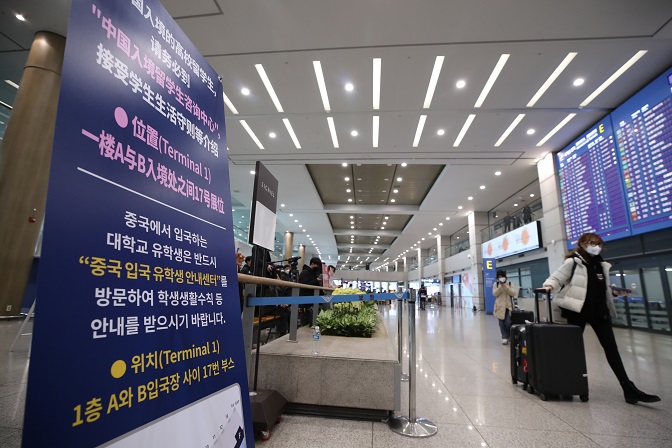 This file photo shows a foreign student walking past a public notice on quarantine procedures for international students at Incheon International Airport, west of Seoul. (Yonhap)

SEOUL, Aug. 27 (Korea Bizwire) — The number of international students studying in South Korea fell for the first time in six years in 2020, due mainly to the coronavirus outbreak, government data showed Thursday.

According to the data released by the Ministry of Education, there were 153,695 foreign students enrolled at domestic universities and colleges as of April 1 this year, marking an on-year decrease of 4 percent, or 6,470 people.

It is the first time since 2014 that international student numbers at local universities have shrunk year-on-year.

“The disappearance of foreign students from non-degree programs seems to reflect the grim situation unfolding in the wake of the COVID-19 outbreak,” said a ministry official.

Chinese students accounted for the largest percentage of foreign students here, at 43.6 percent, though the proportion fell 0.8 percentage point from the previous year.

Students from Vietnam made up the second-largest group accounting for 24.9 percent of the total.

Due to falling fertility rates, meanwhile, the number of kindergarten, elementary, middle and high school students in South Korea declined 2.1 percent from the previous year to 6,010,014 this year, the data found.

Reflecting the downward trend, the number of kindergartens and elementary, middle and high schools contracted 0.3 percent to 20,740.

Contrary to the decreases in student and school numbers, the number of teachers at those schools edged up 0.4 percent to 498,281.

Notably, the number of multicultural students, who refer to those from international marriage families and foreign households, increased by 7.4 percent to 147,378, the ministry said.