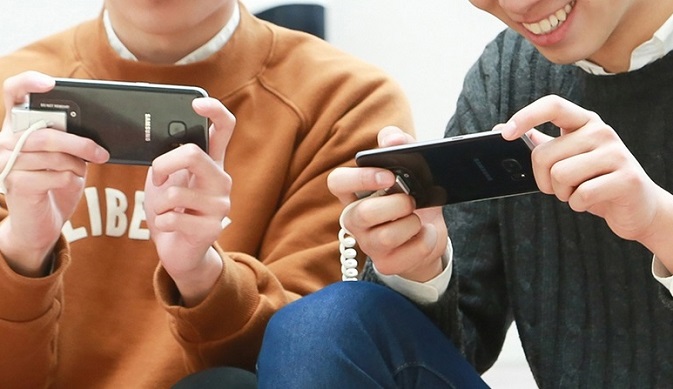 In this photo, provided by Samsung Electronics Co., users play a mobile game with Galaxy smartphones.

According to a report released by the U.S. social networking giant, the number of domestic mobile gamers stood at 9.4 million in July 2020, up 34 percent from the figure recorded in March when the impact of the pandemic peaked.

Among the countries Facebook surveyed, this represented the second biggest growth behind Britain. (50 percent).

During this period, the average hours per week spent playing mobile games increased from 7.8 hours to 9 hours for existing players, while new players spent an average of 9.9 hours per week playing such games.

“I socialize with my friends through mobile games rather than face to face. Before the outbreak of the coronavirus, it was about a 50:50 ratio, but now online meetings are more frequent.” a local gamer who participated in the survey said.

According to Facebook’s analysis, unlike other countries surveyed, including the U.S., Britain. and Germany, the average age of new mobile gamers in South Korea is higher than existing gamers.

Despite the increase in the number of mobile game users, the amount of per-capita spending on mobile games turned out to have decreased.

On a per-capita basis, domestic users’ monthly spending on mobile games averaged US$22.17 before March of 2020, but has since declined to $16.41.

2 thoughts on “Number of Mobile Gamers Up, but Per Capita Spending on Mobile Games Down”