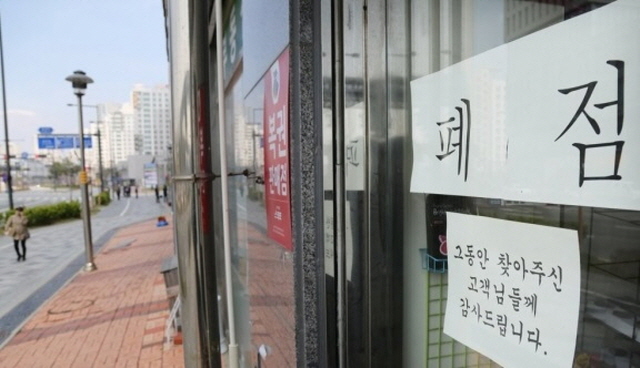 A sign announcing the closure of a convenience store in Sejong City, an administrative hub located 130 kilometers southeast of Seoul. (Yonhap)

SEJONG, Nov. 5 (Korea Bizwire) — The number of nonwage workers such as those self-employed in South Korea edged down 0.9 percent in 2019 from a year earlier amid a protracted economic slump, government data showed Tuesday.

There were 6.79 million unsalaried workers as of August, down 62,000 from the same period in 2018, according to the data compiled by Statistics Korea.

The number accounts for 24.8 percent of the country’s employed people, down 0.7 percentage point over the cited period.

Of the total, one-man operations, which don’t hire workers, numbered 4.12 million this year, up 2.4 percent, while 1.53 million people hired workers to run their businesses, which marks a 7 percent decline, and 1.13 million were serving family-run operations without pay, down 3.7 percent.

Male unsalaried workers totaled 4.16 million, while the figure for women stood at 2.63 million. Those in their 50s and 60s accounted for 62 percent of all nonwage workers, followed by 22.4 percent for people in their 40s.

The data showed that 22.5 percent of them were engaged in private or public service businesses, while 20.8 percent were in the agricultural sector and 20.3 percent were running wholesale and retail shops.